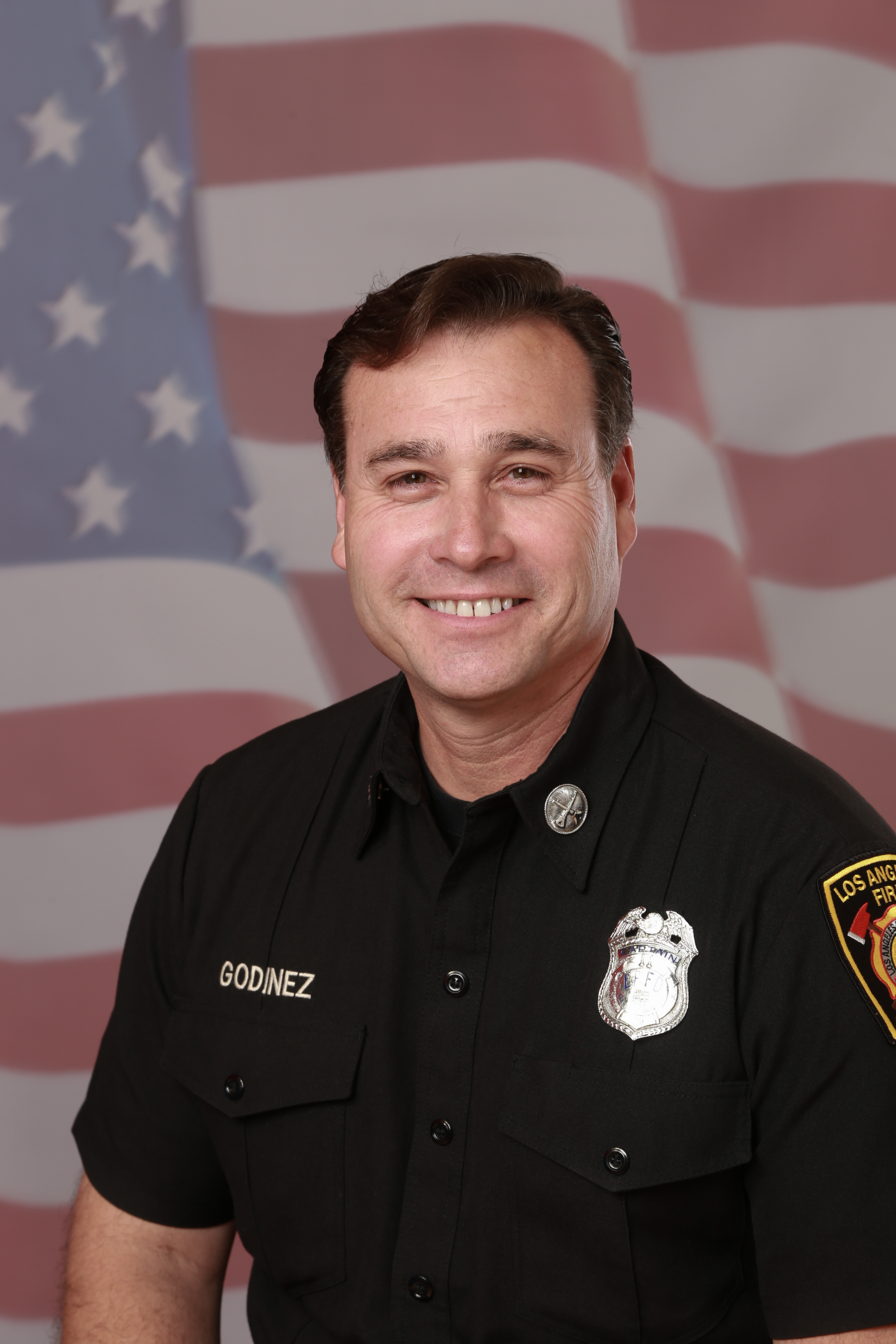 With 36 years of dedicated service to the City of Los Angeles, Captain (Retired) II Rick Godinez left an indelible mark on the Los Angeles Fire Department and is the well-deserved recipient of the 2019 Firefighter of the Year award.

Rick joined the Department on September 4, 1984, and after graduating from Drill Tower 89, embarked on a career serving at ten different fire stations as he promoted through the ranks. His skills in leading and teaching were recognized early resulting in instructor positions in Disaster Preparedness and the Drill Tower.

Wanting to contribute even more to the City and his community, Rick also served on the Incident Management Team (responding to large scale incidents both in the City and nationwide) where he held positions of Plans Manager, Public Information Officer, and Public Affairs Specialist. During this time, he responded to numerous deployments including the 9/11 Terrorist Attacks, Salt Lake City Winter Olympic Games, Haiti Earthquake, and Hurricanes Katrina / Rita / Gustav / Hannah / Ike / Harvey / Irma. In recognition of his experience and dedication, he was selected to serve on the National Federal Emergency Management Agency (FEMA) Public Affairs Work Group for 10 years and served as the Chairperson for 2 years.

One of Rick’s greatest influence and inspiration lay in his role as the Senior Fire Chaplain for the Department, where he left a positive and lasting impact on the men and women of the LAFD and their families. He led a voluntary team of 11 Chaplains and two trainees in providing spiritual and emotional support while coordinating active duty and retired memorials, weddings, hospital visits, and ceremonies. Rick delivered invocations, benedictions, and eulogies for ceremonies, memorials and countless events. Rick also served on the Los Angeles Firemen’s Relief Association Board as a trustee for over 13 years where he helped widows, orphans, and disabled firefighters at their most difficult times. As Chair of the Marketing & Development and Scholarship Committees, and founder of the Family Support Group, he exemplifies the organization’s mission of “firefighters helping firefighters”.

Captain Godinez embodies the Department’s core values of Service, Professionalism, Integrity, Respect, Innovation, and Trust. The Los Angeles City Fire Department and the City of Los Angeles Firefighters Association are proud to recognize Captain II Rick Godinez as the 2019 Firefighter of the Year.