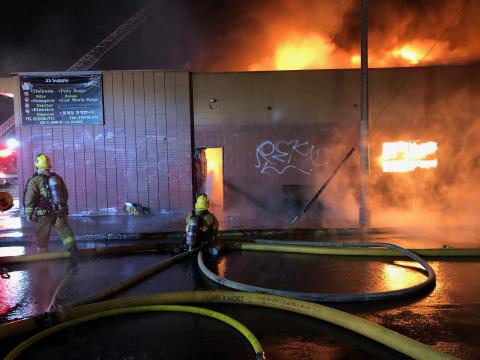 A well involved commercial fire meant an early morning for firefighters as they defended neighboring businesses from damage.

At 4:29AM on August 14, 2019 the Los Angeles Fire Department responded to 2501 S Main Street for a reported structure fire. Firefighters arrived to find a 50‘ x 100’ commercial building, with fire showing on all sides.

The well entrenched fire required a defensive operation from the start. Firefighters deployed master streams to include ladder pipes and large diameter hand lines.  As the roof collapsed on the 66 year old structure, crews continued to safely apply copious amounts of water from the exterior.

Once Incident Commander, Assistant Chief Kristina Kepner, deemed the blaze under control and conditions safe, she directed a return to an offensive operation so firefighters could reach the isolated pockets of fire and ensure full extinguishment.

115 firefighters waged the battle for one hour and 29 minutes before a complete knockdown was determined. Their tenacious efforts ensured the neighboring businesses were undamaged and no injuries were reported.

The LAFD Arson and Counter-Terrorism Section is actively investigating the cause per protocol for an incident of this scale.