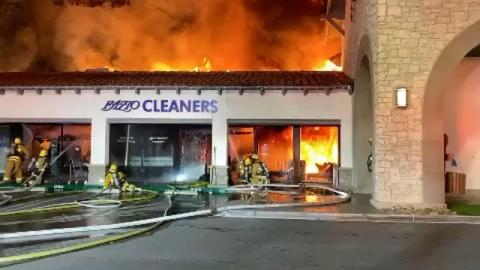 Despite the challenges of a common attic giving fire the room to spread, firefighters saved multiple businesses this morning in Woodland Hills.

At 3:07AM on December 20, 2019 the Los Angeles City Fire Department responded to a reported structure fire at 23383 W Mulholland Drive in Woodland Hills.  Firefighters arrived on scene to find a large, commercial strip mall with heavy fire showing through the roof in one unit.

Crews immediately initiated a coordinated fire attack and roof operation. While the truck companies worked to block progression of the fire down the structure with vertical ventilation, engine companies faced the flames head on. The strip mall had different roof lines with some units connecting while others were separated by a division wall. Four of the businesses shared a common attic, which gave the fire a tunnel in which to travel.

When the structural integrity of the roof of one unit (DBA Fazio Cleaners) came into question, all crews were directed out of that unit as the fight continued.  Over 100 firefighters both from LAFD and Los Angeles County Fire Department battled for 1 hour and 18 minutes before an official knockdown was declared by Incident Commander, Assistant Chief John Drake.

As crews worked to address any remaining pockets of fire, officers saw smoke starting to issue from the roofline of the adjoining business, Pet Food Express. This unit was protected from the bulk of the fire due to a division wall, however, embers made it into the attic. Crews worked to locate and extinguish the fire, preventing it from spreading while firefighters quickly conducted salvage operations to protect the contents of the business from water damage. Their efforts paid off with the fire held to one portion of the attic.

In total, only two (DBA Fazio Cleaners and Nancy’s Alterations) of the four businesses on the affected section suffered heavy damage and no injuries were reported.

Per protocol, the LAFD Arson and Counter-Terrorism Section (ACTS) responded to the incident. After the investigation, the cause is officially 'Undetermined, not suspicious in nature".