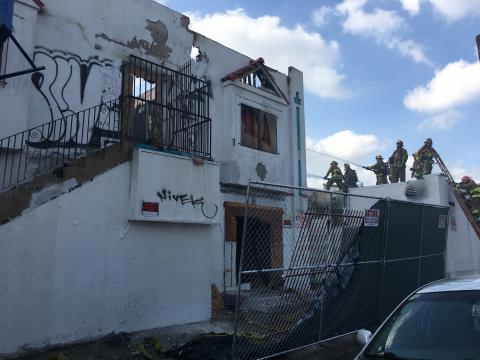 Interior fire attack immediately made entry while the truck company went to the roof to provide vertical ventilation. Heavy fire was encountered both on the first and second floors.  As firefighters successfully extinguished the bulk of the fire on the first floor, the structural integrity of the building started to falter.  With visible signs of pending collapse, Incident Commander Asssitant Chief Kristina Kepner made the call to transition to a defensive operation.

All firefighters safely exited the structure and left the roof to establish ladder pipe operations and hand lines for an exterior fire attack.  81 firefighters achieved a knockdown of the fire in 1 hour and 22 minutes with no injuries reported. A human remains detection K9 team responded to the incident to conduct a thorough search to ensure no victims were hidden under the debris. The cause of the fire is under active investigation by the LAFD Arson and Counter-Terrorism Section.