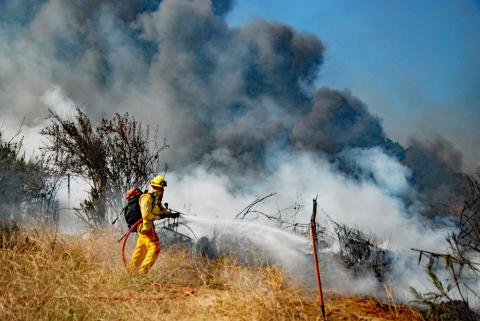 A non-injury brush fire in the Sepulveda Dam Recreation Area was held to less than seven acres Tuesday afternoon, but not before displacing scores of homeless persons who had taken residence in the area's thick vegetation.

The Los Angeles Fire Department (LAFD) was summoned at 3:33 PM on July 30, 2019 to smoke seen near the intersection of Balboa Boulevard and Victory Boulevard, where firefighters arrived quickly to discover more than three acres of grass and brush ablaze near homeless encampments in the northwest portion of the 2,131 acre flood control basin.

With light wind pushing the fire in a westerly direction, a well-coordinated air and ground assault by 138 LAFD personnel - including 4 helicopters, was soon joined by the Los Angeles County Fire Department (LACoFD) responding in automatic aid with four camp crews, a battalion chief, two crew supervisors and a helicopter.

As the fire sought to double in size, a series of explosions were heard from within the fire's perimter, as propane cylinders at the encampments erupted from the intense flames.

Undaunted, firefighters safely shepherded as many as one hundred homeless persons from the advancing flames, as a series of precise helicopter water drops stopped the forward advance of fire in less than 90 minutes.

Firefighters with hoselines were soon joined by handcrews from LAFD and LACoFD at the fire's flanks, their synchronized effort extinguishing all visible flame in less than 3.5 hours.

As Fire Department helicopters returned to base, the LAFD strategically deployed Unmanned Aerial Systems (drones) above the fire for command support and aerial reconnaissance, the craft formally identifying hot spots with infrared imaging, and determining via GIS calculation, that the blaze had consumed less than 7 acres.

No structures were damaged, and no injuries were reported said LAFD Assistant Chief Patrick Butler, who added "The Los Angeles Fire Department will continue to work through the night to ensure that all embers are extinguished, and that all hazards associated with the fire are mitigated."

While the fire's origin was determined to be within one of the homeless encampments, the specific cause of the fire remains under investigation.