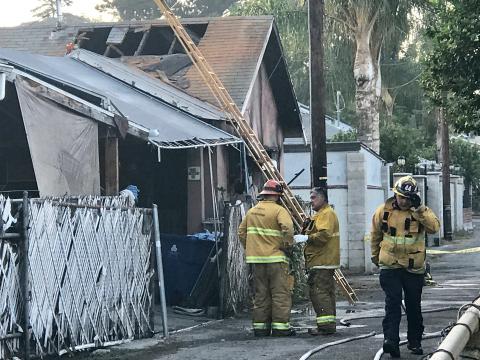 An early Saturday morning house fire took the life of a preteen girl, and sent six other persons to the hospital, including one with critical injuries.

The Los Angeles Fire Department received a 9-1-1 call at 4:28 AM on September 8, 2018, reporting a structure fire with persons trapped at 3316 1/2 Thorpe Avenue in the Cypress Park neighborhood of northeast Los Angeles. LAFD firefighters arrived quickly, rushing to the rear of the property, where they found five residents struggling to escape from the rear window of an approximately 1,000 square-foot one story home heavily involved with flames.

Firefighters came to the direct aid of those attempting to flee the burning building as their colleagues extended firefighting hoselines to battle intense flames emanating from windows at the front of the home. As three children, a man and a woman were assisted in exiting the oppressively hot and smoke-charged structure via the rear window, fire department responders used a power rotary saw to breach a steel security door and enter the burning premises in a quest to rescue one child and a pet dog that remained unaccounted for.

Driven to their knees by the heat of flames roaring overhead, firefighters pushed dauntlessly forward into the burning residence, where they soon discovered the lifeless body of a 10 year-old girl. Rescued from the flames and placed into the immediate care of LAFD Firefighter/Paramedics, she sadly proved beyond medical help and was determined dead at a nearby hospital. The pet dog was later discovered to have also succumbed to the flames.

While the woman, her 5 and 9 year-old children and a 10 year-relative who were rescued from the home sustained only minor injuries - and were considered in fair condition when taken by LAFD ambulance to an area hospital, the man who fled the home behind them sufferered severe smoke inhalation. Treated assertively by a team of LAFD Firefighter/Paramedics, he was in critical condition on arrival at a nearby hospital.

The first arriving 29 firefighters took only 14 minutes to fully extinguish the blaze, confining the fire to the structure of origin. During the fast-paced assault on the flames, one firefighter sustained a non-life threatening injury that was later treated at a local hospital.

Though at least one smoke alarm was discovered in the burnt home, its functional status at the time of the fire and role in alerting occupants could not be immediately determined. The 95 year-old wood-frame and stucco home was not equipped with optional residential fire sprinklers.

Volunteers from the Los Angeles Mayor's Crisis Response Team were deployed to the scene to assist family, friends, neighbors and witnesses in coping with the tragedy.

Monetary loss to from the fire is still being tabulated. The cause of the blaze remains under active investigation. A positive identification of the dead girl, as well as the specific cause, time and manner of her death will be determined by the Los Angeles County Department of Medical Examiner-Coroner.