LOS ANGELES – Members from the Los Angeles Fire Department (LAFD) Arson/Counter-Terrorism Section and The National Response Team (NRT) of the Bureau of Alcohol, Tobacco, Firearms and Explosives (ATF) today announced that the on-scene origin and cause investigation into the December 8, 2014, Da Vinci Apartment Complex fire is complete, and determined the fire was an act of arson. 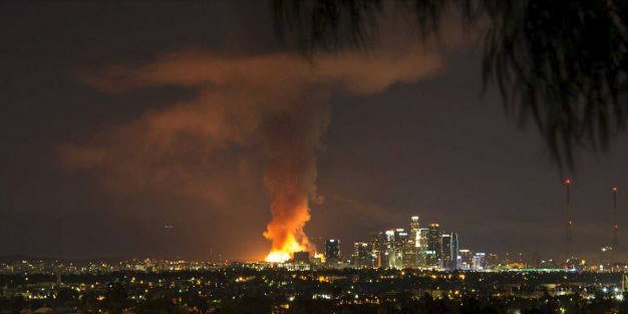 The fire at 900 West Temple Street destroyed the seven-story complex under construction, damaged a nearby high-rise structures and the Harbor (110) Freeway.  Investigators recovered sufficient evidence to eliminate all known potential accidental causes and determine the fire was intentionally set.  The fire caused an estimated $20 million to $30 million in damage to the Da Vinci Apartments. Total damage estimates to nearby businesses and Caltrans property remain undetermined at this time.

Specific information regarding the fire and investigative efforts will not be released at this time, as the criminal investigation is ongoing.

Investigators from ATF's NRT and the LAFD sifted through 75,000 square feet of debris, took photographs, recovered potential evidence from the scene for analysis by the ATF's National Laboratory and conducted many interviews throughout the community. The NRT's specialized resources include a canine team, certified fire investigators, forensic chemist, electrical and fire protection engineers, and additional specialists.

This NRT activation was the fourth this fiscal year and 763rd since the 1978 inception of the program. The team finished combing through the debris on Wednesday, and will continue to follow up on leads and analyze evidence recovered at the scene.

"The work at the crime scene is finished, however our investigation is not over," said ATF Special Agent in Charge Carlos A. Canino "ATF will continue to work together with our state and local partners to investigate this crime and bring those responsible to justice."

“We appreciate the NRT’s response and assistance with this large and complex investigation,” said Battalion Chief Robert Nelson, head of the LAFD’s Arson/Counter-Terrorism Section. “We continue to work with the ATF, LAPD and other law enforcement agencies to vigorously pursue this investigation. Arson is a serious crime and we will use all of our available resources to arrest and prosecute any individuals involved in any arson fire in Los Angeles.”

NRT team supervisor Dan Heenan said “Without the cooperative effort of ATF and LAFD, we could not have completed the crime scene work in the time frame we did. It's not often you can bring this many people together from around the United States to work towards a common goal and have the mission completed in such a short time frame. I've been impressed with the professionalism of all the agencies involved.”

These two individuals are not considered suspects or persons of interest. Investigators have identified them as being in the area of the fire, and merely wish to interview them.

The public is encouraged to view the video and images via: LAFD.ORG/NEWS

ATF is the federal agency with jurisdiction for investigating fires and crimes of arson. More information on ATF can be found on atf.gov.