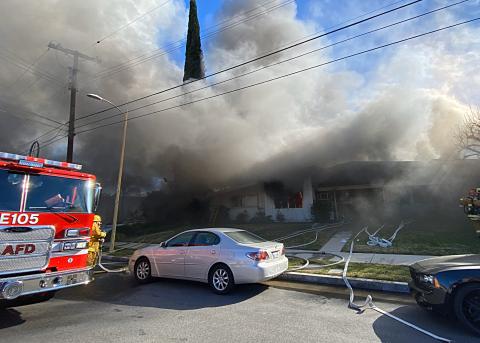 A woman was hospitalized in grave condition Thursday afternoon, after being rescued from her burning home in the west San Fernando Valley.

The Los Angeles Fire Department was notified at 1:53 PM on January 23, 2020 of a structure fire at 23530 Burbank Boulevard in Woodland Hills. Firefighters arrived quickly to find a 2,254 square foot one-story home with heavy smoke and fire showing.

Met by two family members in the front yard who stated a woman was trapped inside, LAFD responders commenced a bold offense on the flames with handlines, performing a brief transitional attack as their rooftop colleagues quickly completed vertical ventilation with chainsaws.

Those efforts swiftly allowed the escape of accumulated heat and smoke, and a dauntless return to the interior fire attack with simultaneous search within the fiercely burning home.

Soon thereafter, firefighters discovered a lifeless 78 year-old woman in a front room. Rushing her from the premises to a nearby LAFD ambulance, she was provided advanced life support measures by a team of veteran Firefighter/Paramedics, who restored her pulse en route to an area hospital, where she was admitted in grave condition.

Despite the valiant efforts of prehospital and clinical care providers, she died of injuries related to the fire on January 25, 2020. No other injuries were reported.

Forty six firefighters under the command of Battalion Chief Andrew Wordin confined the fire to the structure of origin, and an adjoining carport - which collapsed during the blaze. They extinguished flames in just 31 minutes.

Though a remnant of one hard-wired smoke alarm was discovered in the heavily damaged premises, its functional status at the time of the fire could not be immediately determined.

An examination of the "normally openable" style windows near where the woman was found, determined that they had been secured by the placement of difficult-to-remove wooden dowels, and in one case a metal screw, which prevented those windows from being opened as a path of emergency egress.

The 59 year-old home was not equipped with optional fire sprinklers.

Volunteers from the Mayor's Crisis Response Team were dispatched to assist the injured woman's family, while an Inspector from the City's Department of Building & Safety "red tagged" the building as unsafe for civilian access following the fire.

The cause of the blaze was determined to be electrical in nature, and is considered accidental.