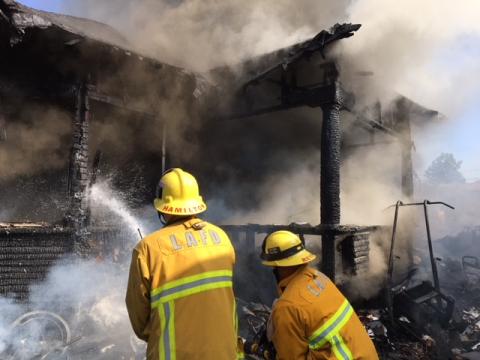 On October 10, 2017 at 9:48 AM, the Los Angeles Fire Department was notified of a structure fire at 219 N Ave 53 in Highland Park, where firefighters found heavy fire billowing from a home. The Craftsman-style home built in 1905 created a unique challenge with wood siding and heavy vegetation igniting the home next door built in both similar age and style, creating an intense battle for firefighters.

As the inferno raged on with flames both above and below the initial structure and an impending roof collapse, crews were eventually forced to defensively extinguish the home from the exterior.

Additional companies were added to this major emergency structure fire until 126 LAFD Firefighters extinguished the flames in just 70 minutes with 3 members medically evaluated and two of them being transported to a local hospital with non-life threatening injuries associated with heat exhaustion. Both of the homes were extensively damaged but due to the on-scene efforts throughout the firefight, an apartment building next door was saved and no civilians were injured.

The monetary loss from the fire is still being tabulated. The cause of the fire remains under active investigation.