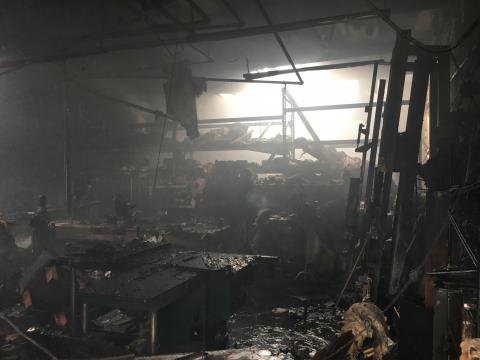 Despite a common attic connecting four businesses in a larger commercial building, firefighters prevented the blaze from extending beyond one unit.

At 5:26PM on June 14, 2019 the Los Angeles Fire Department responded to a reported structure fire at 20934 W Victory Blvd in Woodland Hills.  Firefighters arrived to find a large (16,544 sq ft), one story row of commercials with fire showing from the end unit.  The truck company went to the roof as fire attack intiated their entry through the front. An additional company went around to the back of the structure to evaluate possible access points.  While roof division began cutting ventilation holes, fire attack reported difficulty in locating the seat of the fire.  Firefighters continued pushing into the unit but the intense heat prevented their advance before reaching the (still not located) fire.  With fire in the building's common attic, it became an untenable position for interior fire attack.  Incident Commander, Assistant Chief Corey Rose, made the call to transition to a defensive operation.  The companies at the back of the structure were able to open up a rolling steel door and using large diameter handlines, hit the fire from the outside.

Once the bulk of the flames abated, the incident reverted to an offensive operation and firefighters moved inside to pull ceiling and ensure no extension through the attic.  Official 'knockdown' was achieved by 106 firefighters at the 49 minute mark. Their diligent efforts stopped this fire from moving across businesses and leaving a trail of destruction.  The business adjacent to the fire unit suffered water/smoke damage and the two additional units only sustained smoke damage.

Paramedics evaluated one civilian patient who declined LAFD transport.  Two firefighters were transported to the hospital with non-life threatening injuries. LAFD Arson responded and this remains an active investigation with cause and dollar loss to be determined.