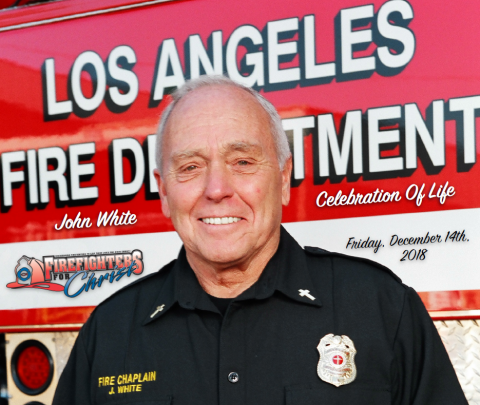 The Los Angeles Fire Department is saddened to announce the passing of retired Captain II and Fire Chaplain John Andrew White, who died on November 24, 2018.  Even after his 44 years of active duty, he continued his dedication to serve others, which earned him the LAFD Firefighter of the Year award in 1997 and LAFD Lifetime Achievement Award in 2011.

John A. White was born on January 26, 1934, in Los Angeles to Frank and Ingrid White. He was raised in Alhambra, and after high school enlisted in the Navy in 1951 where he served on the destroyer U.S.S. Brown during the Korean Conflict. After the Navy, John served with the Merchant Marines, worked with Southern California Edison, and in construction before joining the Los Angeles Fire Department on September 23, 1957.  During his 44 years on the LAFD, he co-founded Firefighters for Christ International in 1976 and went on to serve as a Fire Chaplain until his passing.

As a member of the Firefighters for Christ Emergency Relief Team he provided support at numerous devastating incidents including the September 11 attacks, Hurricane Katrina, 2010 Haiti Earthquake, and Japan earthquake and tsunami of 2011.  He also led firefighter training missions across the globe teaching life-saving skills while providing donated equipment and sharing the gospel to inspire those around him.

The men and women of the LAFD mourn the passing of legendary Captain White as we prepare to celebrate his life and legacy on December 14, 2018, at Saddleback Church in Lake Forest.  For those who cannot attend, the service will be live streamed beginning 9:50 AM at https://www.sundaystreams.com/go/influencerswest.