Teamwork Saves a Man at a Local Restaurant 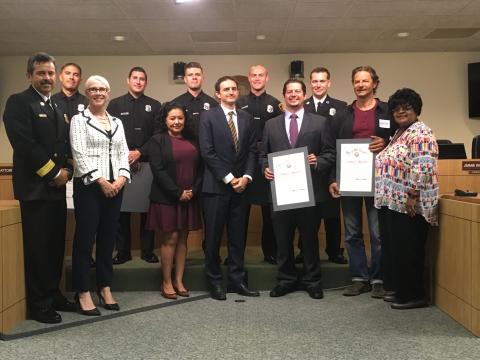 Board of Fire Commission and Award Honorees
Photo Credits:
LAFD David Ortiz
Los Angeles
-
Ten extraordinary people were recognized by the Board of Fire Commissioners and Los Angeles Fire Department for saving a man’s life in the middle of a restaurant.  In the evening of March 7, 2017 at the Little Door Restaurant in the Fairfax community, a man eating dinner on the patio suddenly collapsed. With nearly 100 customers watching he laid there unconscious, not-breathing, and lips turning blue. Onlookers from an emotional and frightened crowd watched while the owners of this restaurant jumped into action. They immediately called 911, began CPR, found a physician among their patrons, and even ran across the street to a “home for the aging” to bring back an oxygen bottle.
While the physician jumped into action, our 911 dispatcher rapidly processed the call, selected the correct resources to manage the incident, and confirmed the patient was receiving CPR.  LAFD Engine 61 arrived quickly and took over CPR using an AED to shock the patient twice. Rescue Ambulance 58 delivered advanced life support treatments and critical medications; all while onlookers from the restaurant watched in amazement.
Suddenly, in the middle of the restaurant, the dying man’s heart beat began again and the crowd erupted in cheers! He had achieved “return of spontaneous circulation” and by the time he arrived at the hospital was awake and talking to the staff.
The teamwork of every individual involved in this dramatic event is what allowed a man to come back to life and live another day in what is referred to as the "chain of survival."
In recognition of the extraordinary lifesaving efforts by these individuals, the following civilians and firefighters received a Certificate of Appreciation presented at the Board of Fire Commissioner meeting:
Owners of Little Door Restaurant: Mr. Frederic Meschin, Mr. Nicholas Meschin
Restaurant physician: Dr. Ilan Shapiro, M.D.
Captain I O’Gorman
Firefighter II Escorcia, Jr.
Firefighter III / Paramedic Scachetti
Engineer Czubek
Engineer / Paramedic Guzman
Firefighter III / Paramedic Thompson
Firefighter III / Dispatcher Ibarra