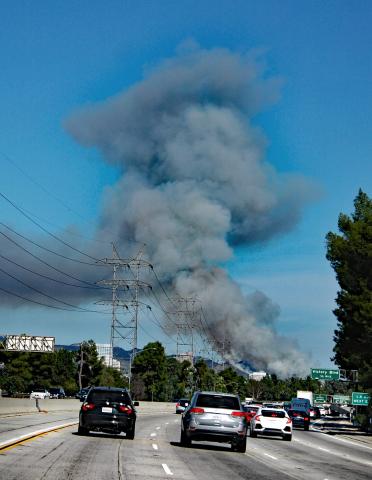 The fire started in Los Angeles and quickly burned into the City of Glendale
Photo Credits:
Photo by Mike Meadows
LOS ANGELES
-

A combined effort both in the air and on the ground by mulitple agencies stopped a 30 acre brush fire from damaging any homes.

At 4:09PM on August 25, 2019 the Los Angeles Fire Department responded to a reported brush fire in the 2900 block of W Colorado Blvd. Firefighters arrived to find approximately one acre of brush burning in between the transition roads of the 2 and 134 Freeways in the Eagle Rock area.

While firefighters worked to get a water supply established on the freeway, the wind picked up embers and carried them across to the north of the 134 Freeway creating a new spot fire. Additional resources were immediately requested and the incident quickly grew to a Major Emergency status.

The steep terrain and heavy vegetation on the hill meant air attack took point on hitting the leading edge of the fire. Ground crews from LAFD, Glendale Fire, Angeles National Forest (ANF) and Los Angeles County Fire worked together to anchor the base of the fire and establish hand lines around the lower flank.

Three LAFD helicopters, the LA City contracted Erickson Air-Crane and two additional helicopters from LA County Fire coordinated continuous water drops to attack the hot flank burning uphill into the City of Glendale which was putting a community of approximately 100 homes at risk.

Over 215 LAFD firefighters plus resources from Glendale Fire Department, ANF and LA County Fire operated under the leadership of Incident Commander Assistant Chief Kristina Kepner, achieving a full stop to all forward progress of the fire by 7:30PM. Crews remained on scene throughout the night extingiushing hot spots and ensuring no flare-ups put the community in danger.

The tenacious efforts of all firefighters both on the ground and in the air prevented damage to any homes and there were no injuries reported.

The LAFD Arson and Counter-Terrorism Section (ACTS) is actively investigating the cause of the fire.