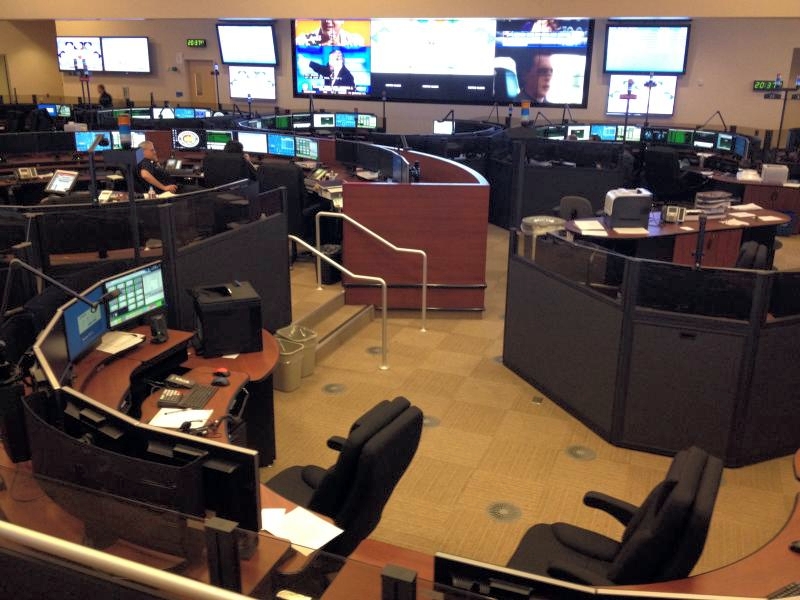 MFC began operations in fiscal year 2011-2012 with the opening of a modernized dispatch center that incorporates significant technological upgrades; such as, Voice-Over Internet Protocol (VOIP) A system capable of supporting next generation 9-1-1 voice and data delivery; a new fiber optic networked Fire Station Alerting System; and newly configured workstations allowing for operational efficiency. Before opening MFC, the LAFD dispatch center was referred to as "OCD," Operations Control Division, which was located on a subterranean level of City Hall East. Upon activation of MFC, OCD became the back-up dispatch center.
The 78 dispatchers assigned to Metro Fire Communications are either Firefighter/EMTs or Firefighter/Paramedics and have all served previously in the field. Their primary responsibilities are as call takers and resource controllers. MFC is run in a similar structure to an LAFD field division. An Assistant Chief commands the entire operation while working a weekday shift schedule. The dispatchers are assigned 24-hour platoon duty schedules (as in the field) and are commanded on a daily basis by LAFD Captains and an MFC Battalion Chief, who also work the platoon schedule.
A number of dispatchers have added responsibilities that correspond to their advanced training. These include the duties of Resource Ordering Status System (ROSS) Management, instructors for upcoming dispatch training classes, peer instructors for newly trained dispatchers, LAPD and 311 dispatch orientations, Paramedic First Responders (AU-200) and various new projects.