Print
The Los Angeles Fire Department has developed an elite Bicycle Medic Program. Cost effectiveness and mobility allow LAFD Bicycle Medic Teams to bridge the gap between foot patrol and rescue ambulances, which can be the difference between life and death in congested or crowded conditions.
Agencies that currently have these programs report that citizens are more likely to interact with Emergency Medical Service (EMS) personnel on bikes than those in ambulances. This accessibility fosters better community interaction, understanding, and support of the Department’s programs. 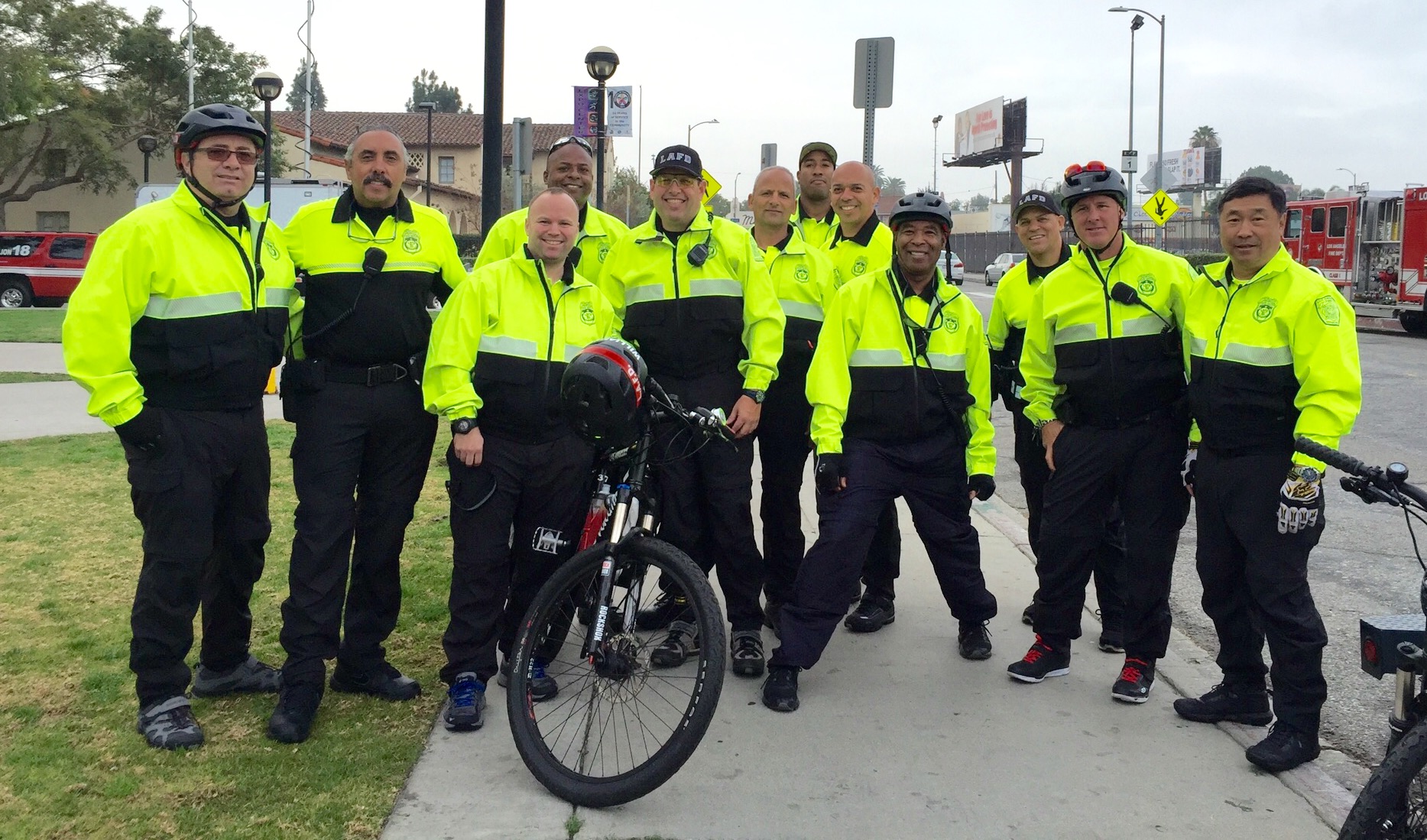 The concept of using a bicycle as a means of transportation for emergency services dates back to the late 19th century. After the invention of the automobile, this practice came to an end. In 1987, two Seattle Police Officers proved that bicycles could again be effective in emergency services.
Approximately six years after the development of police patrol units, EMS agencies began to use bicycles for emergency medical operations. Providers have used bicycle programs for over 10 years and law enforcement agencies for over 20 years.
The LAFD initially debuted the new Bike Medic Team at the 2004 Los Angeles Triathlon. Within minutes, the Team was treating an injured bystander on the racecourse. Though an ambulance was simultaneously dispatched, it took over 10 minutes for the vehicle to make its way through the throngs of spectators.
The value of the Bicycle Medic Team was evident soon after their first deployment and they continue to be a valued asset at special events.
Now, there are more than 300 Paramedic Bicycle Teams nationwide. In Los Angeles County, three of the 43 approved Advance Life Support (ALS) providers operate Paramedic Cycle Teams:

The LAFD has the ability to staff 9 ALS Bike Teams.

PURPOSE
The primary purpose of the LAFD Bicycle Medic Team is to provide a rapid response of two fire department members functioning as a paramedic assessment unit.

These bicycle units give mobility to the EMS provider. The EMS personnel can negotiate congested areas during special events, in amusement parks, and at sports arenas.
Examples where the Bike Teams have proven their worth are such events as the Los Angeles Marathon, Fiesta Broadway, Rose Bowl, Rose Parade, Van Nuys Air Show, and other large concerts and sporting events.
The Bike Teams administer emergency medical care in areas of large crowd volume where access by fire department apparatus may be delayed or impossible. The access problems associated with these events lead to longer response times for Paramedics and Firefighters.
Bicycle Medic Teams also serve as a public relations tool through elevated personal public interaction.

GATORS
The Bike Medic Program has been a success, often arriving 5 to 10 minutes ahead of other Department resources. However, many times Department apparatus are unable to access the patient due to crowds, traffic congestion or terrain. The recent addition of three John Deere "Gator" micro utility vehicles to the LAFD Bike Medic Program addresses this problem by allowing access and egress to many areas a full-sized vehicle cannot.

Now, LAFD Bike Medics can make rapid, initial, patient contact followed by the "Gator" Team, who can assist with patient care then transfer the patient to an area where the transporting ambulance has access.