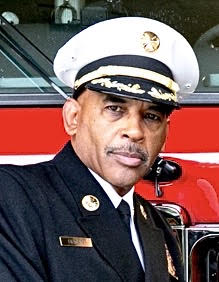 Deputy Chief Armando Hogan was promoted to the rank of Deputy Chief and Commander of the West Bureau in February 2018. He joined the LAFD in 1983 and has previously served as the Chief Training Officer at Los Angeles International Airport; Community Liaison Officer where he represented the Fire Chief as his spokesman, and worked as a firefighter, Inspector, Captain, Battalion Chief and Assistant Chief in various communities throughout Los Angeles.
His most recent assignment was as the Assistant Bureau Commander for Operations West Bureau.
Chief Hogan’s area of service includes the Los Angeles International Airport, the LAX coastal communities, Hollywood, Los Feliz, Griffith Park, Silver Lake, the hillsides and canyon communities that border Hollywood, Pacific Palisades, Bel Air and West Los Angeles including UCLA.
He holds a Bachelor’s Degree in Emergency Services Management from the Union Institute and University and a Master’s Degree in Leadership from the University of Southern California. He has also attended the John F. Kennedy, School of Government at Harvard University where he received an executive certificate for his participation in the National Preparedness Leadership Initiative.

He is married to his beautiful wife Marcia of 25 years and is the proud father of a son and daughter.