On Saturday 14 May, 2022 the Los Angeles City Fire Department celebrates Fire Service Day with an open house at all neighborhood fire stations.

The varied activities included demonstrations, pancake breakfast and fire/life safety information. This annual event serves to create lasting memories and strengthen the bond between the LAFD and the communities we serve.

The day is led by the Honorary Fire Chiefs selected by each of the four geographic bureaus for their community ties, public service and support of Your LAFD.

We are pleased to introduce the four individuals selected as a 2022 Fire Service Day Honorary Fire Chiefs:

Paul Scrivano is an active and engaged member of the community with an unwavering dedication to supporting the LAFD. Not only has his restaurant hosted countless fundraisers helping with family needs for LAFD members but he directly supports Fire Station 88 with meals for events, assistance during COVID and FEMA team deployments/training.  His own personal experience with an emergency medical response led to his placing a billboard in a strategic location in the Valley promoting the safety message “Respect the Lights, Pull to the Right, 23 Minutes Saved My Life”.

As Vice President Media Relations for the Hollywood Chamber of Commerce, Ana Martinez is responsible for promoting the community of Hollywood and providing year-round exposure for the entertainment industry at large. The Chamber has experienced unprecedented growth and international exposure as a result of her tutelage and expertise through her long-time promotion of the world-renowned tourist attraction, the Hollywood Walk of Fame.

During her 35-year tenure with the Hollywood Chamber of Commerce, Martinez has produced more than Walk of Fame 800-star ceremonies. She joined the organization after graduating from California Polytechnic University, Pomona and following a stint as a page at CBS Television Studios and within a short period of time was promoted to Chamber publicist. With Johnny Grant, the Honorary Mayor of Hollywood as her mentor, Martinez flourished, eventually assuming sole producer responsibilities for the Walk of Fame star ceremonies.

Martinez was recently honored as a Variety’s “Power of Women” honoree and one of People En Espanol’s “Las 25 Mujeres Más Poderosas” which translates in English to “The 25 Most Powerful Women”.

Martinez is the daughter of immigrant parents from Mexico City and Lima, Peru. She is mother to two daughters, ages 20 and 27.

Director Yomba has served as a Crisis Responder with the City of Los Angeles Mayor’s Office of Public Safety from 2014 to 2018 and was selected as member of the Public Safety Advisory Committee with the Los Angeles Fire Department in 2015.

He was born in Yaoundé, Cameroon, lived in Munich, Germany and currently resides in South Los Angeles. He migrated to the United States in 2004 and completed his executive leadership program at the University of Southern California Sol Price School of Public Policy.

He has also completed advanced coursework in emergency management, counterterrorism, and process improvement and a recipient of numerous commendations and awards for his work in both the private and public sector. He is an active member of various professional organizations including the Community Police Advisory Board, the Leadership in Counter Terrorism Alumni Association, the American Society for Industrial Security, and the Building Owners and Managers Association.

He also strives to promote a style of leadership that stresses intelligent, partnership-oriented strategies involving community stakeholders, as well as various elected officials. 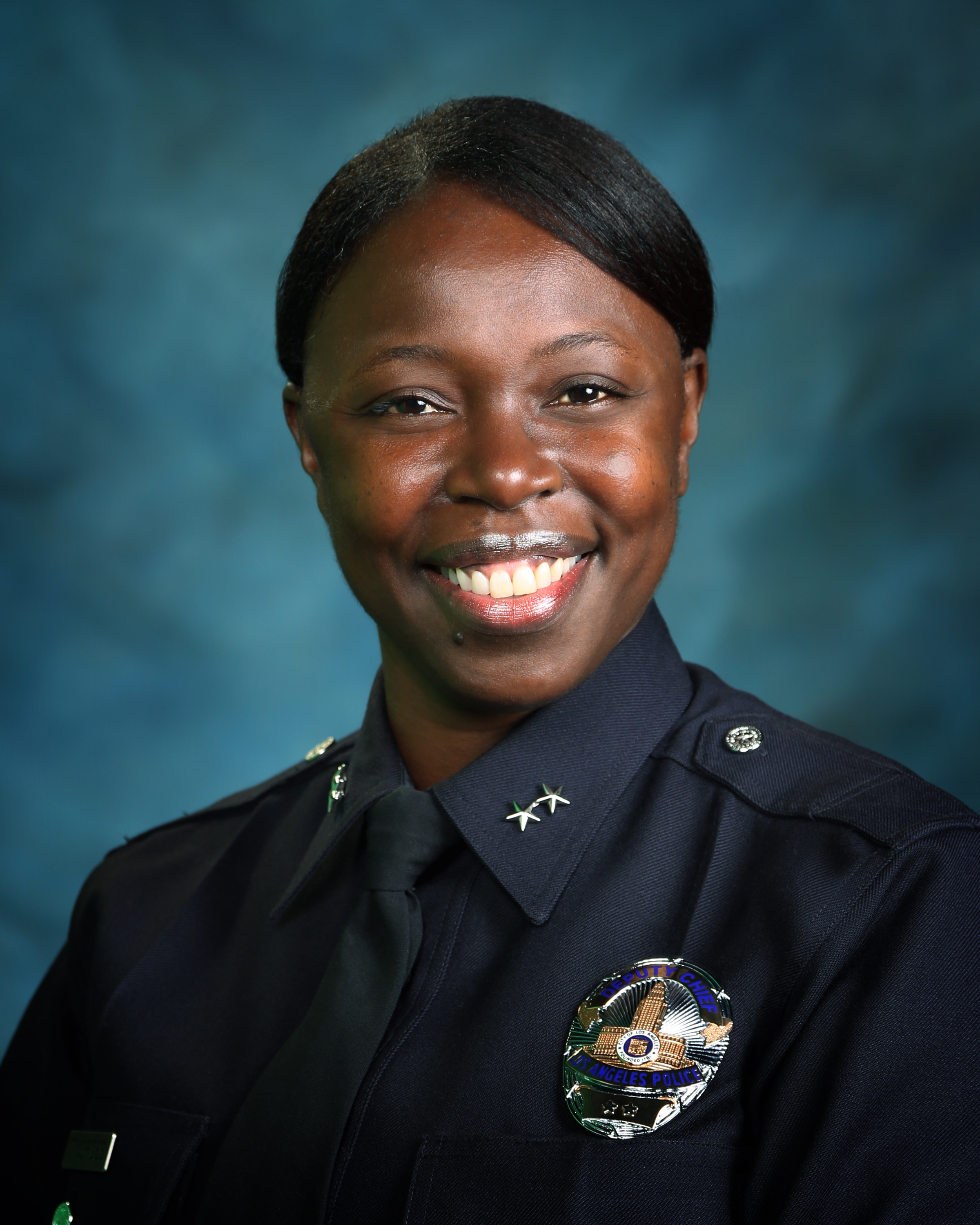 Raised by a single mother, Deputy Chief Emada E. Tingirides is a native Angeleno who spent most of her youth in Watts and Southwest Los Angeles, before moving to Chatsworth for her high school and college years. The daughter of a Nurse Practitioner who spent her early career at Los Angeles County + USC Medical Center, and grandchild to both a Los Angeles County Sheriff Corrections Officer and a teacher of 35 years, Emada decided to become a police officer and serve the city her family had called home for generations, following the civil unrest of 1992.

2015 was quite the year for Emada, as she was named the Public Official of the Year by Governing Magazine, one of Los Angeles’ Most Influential Women by Los Angeles Magazine and was a distinguished guest of First Lady Michelle Obama during the State of the Union Address.

In August of 2020, Emada was promoted to Deputy Chief and was named the Commanding Officer of the newly-formed Community Safety Partnership Bureau (CSPB) by Chief of Police Michel Moore, where she will have oversight of the now nine CSP teams spread across eight development and two parks throughout the City.

While at CSPB, Emada will work with her team to promote and extend the philosophies and components that have made the CSP program so successful to all corners of the Department.

Emada is married to retired LAPD Deputy Chief Philip Tingirides, with whom she has a beautiful blended family of six children.