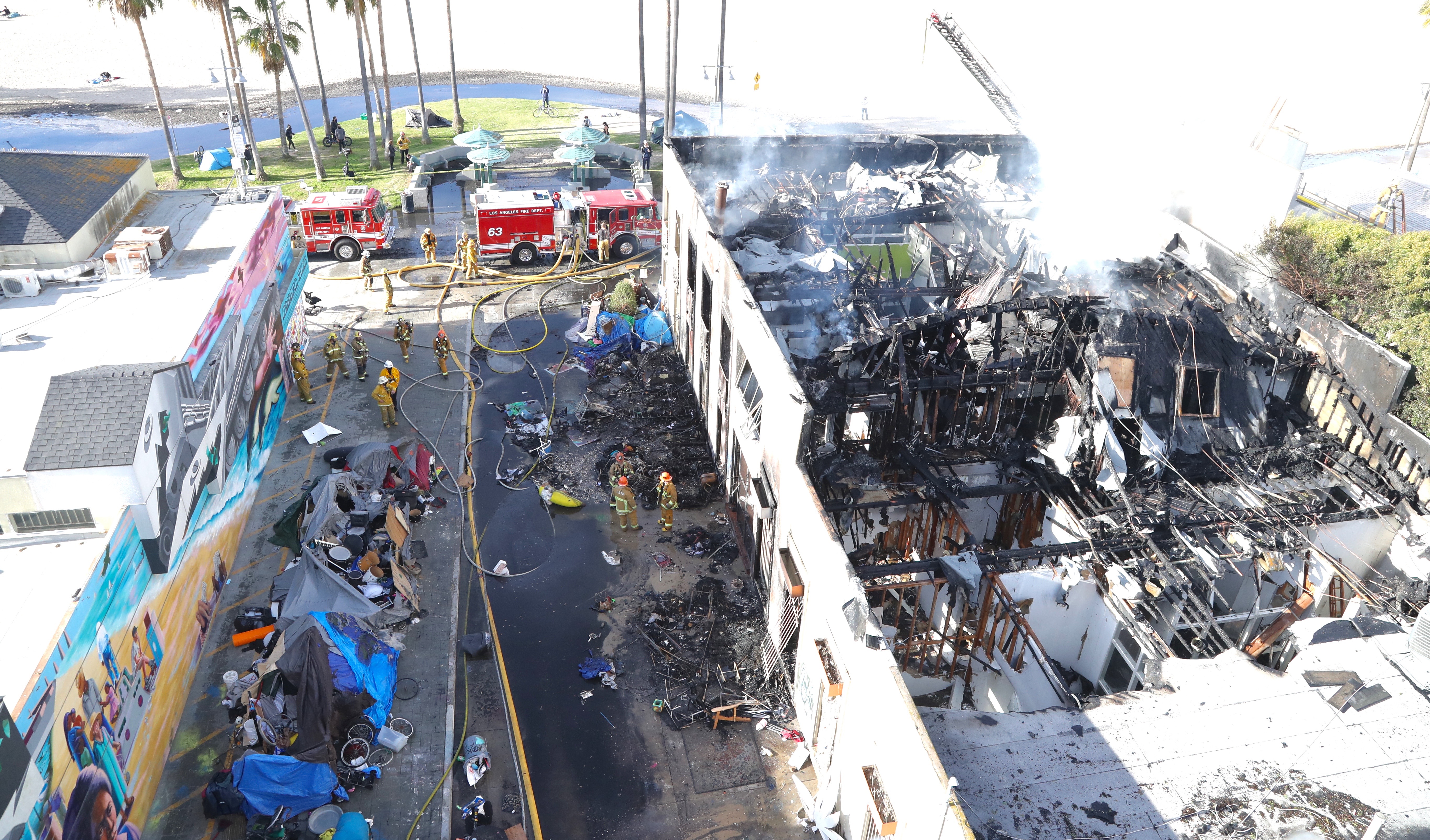 An overhead view of a January 13, 2021 commercial building fire in Venice, California.
Photo Credits: LAFD Photo by Harry Garvin - Creative Commons Licensed For Your Use
VENICE-

An outside fire quickly spread to and destroyed a vacant commercial building near the Venice Beach Boardwalk just before dawn Wednesday, but thankfully caused no injury.

The Los Angeles Fire Department was notified of a rubbish fire at 6:19 AM on January 13, 2021 at 723 South Ocean Front Walk in Venice, where firefighters arrived quickly to discover the outside fire involving a homeless encampment had spread into a vacant two story commercial building, threatening two additional occupied business structures to the north.

Though portions of the fire building and threatened structures were initially believed partially residential, they proved to all have been businesses.

With an aggressive effort to curtail the flames underway, additional firefighters were requested while LAFD crews shepherded bystanders to safety and forcibly breached the perimeter of the well-secured fire building, assuring no one was trapped inside the heat- and smoke-charged structure.

Determining no one to be in peril within the 6,952 square-foot building, and noting evidence of structural compromise and fire through the roof, a swift and well-coordinated transition was made to external defensive operations, to deploy large volumes of water via handheld hose lines and elevated hose streams atop aerial ladders.

One hundred sixteen firefighters under the command of Assistant Chief Dean Zipperman confined the fire to the involved structure and a portion of the encampment, preventing damage to the two adjacent businesses, extinguishing the stubborn flames in 2 hours and 17 minutes.

No injuries were reported.

Though several nearby fire hydrants were readily used by LAFD responders to successfully battle the flames, one - that displayed no evidence of damage or any manner of tampering, proved to be non-functional and was reported to the Los Angeles Department of Water and Power for repair. That individual hydrant's status did not exacerbate fire damage or hinder the control of flames.

The specific cause (emphasis) of this greater alarm fire remains the focus of an active LAFD investigation.