Los Angeles Fire Department (LAFD) Chief Ralph Terrazas joined City Councilmember Jose Huizar and representatives from the Los Angeles Police Department and the Bureau of Alcohol, Tobacco, Firearms and Explosives to announce a $170,000 reward for information leading to the arrest and conviction of the individual(s) responsible for the December 8, 2014, arson fire at the Da Vinci Apartments complex on Temple Street. The press conference was held on Wednesday, January 21st, at 9:15 a.m. in front of City Hall East.

Investigators continue to pursue leads in the case, which was declared an act of arson by the LAFD, LAPD and ATF’s National Response Team. The massive fire caused between $25 million to $30 million in damage to the apartments under construction and two adjacent high-rise office towers. 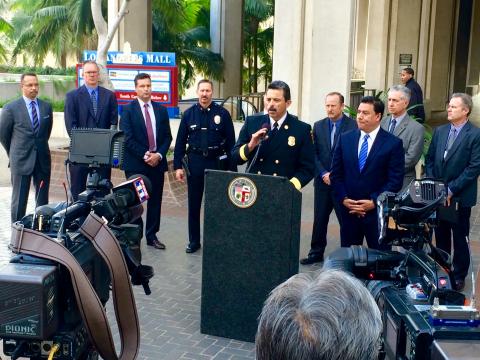 • On December 8th, the LAFD was called to battle one of the largest structure fires we’ve fought in a generation, when an arsonist struck the DaVinci Apartment complex that was under construction on Temple Street.

• This major emergency fire strained our resources, committing more than one third of our on duty personnel to fight this fire, while leaving resources in other parts of the City stretched dangerously thin.

• At the same time, we also battled a large fire just a mile away in the Westlake district.

• It’s a testament to the skill and dedication of the men & women of the LAFD that two major fires could be fought simultaneously without injury or loss of life at either fire.

• The reckless work of the individual or individuals responsible for the Da Vinci fire also exposed more than 250 LAFD firefighters to great peril, fighting an extremely hot and massive fire that stretched an entire City block and caused significant damage to two adjacent high rises buildings.

• And the overall damage from this fire was breathtaking.

• An estimated $25 million to $30 million dollars in the fire building and millions more in the high-rise office buildings that were damaged nearby.

• Arson is a crime that the LAFD and our law enforcement partners take extremely seriously.

• If you commit an act of arson in the City of Los Angeles, we will find you; we will arrest you; we will prosecute you; and you WILL go to jail.

• Our Arson investigators, along with their ATF and LAPD colleagues, continue to pursue leads and at this time we renew our call to the public for their help.

• We are hopeful that this reward will encourage the public to bring forth new information regarding this serious crime.

• I ask that anyone who may have information that will lead to the arrest and conviction of the person or persons responsible for this devastating fire to please contact the LAFD Arson Section at 213-893-9850. 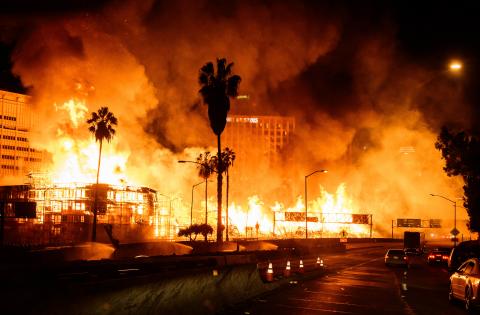