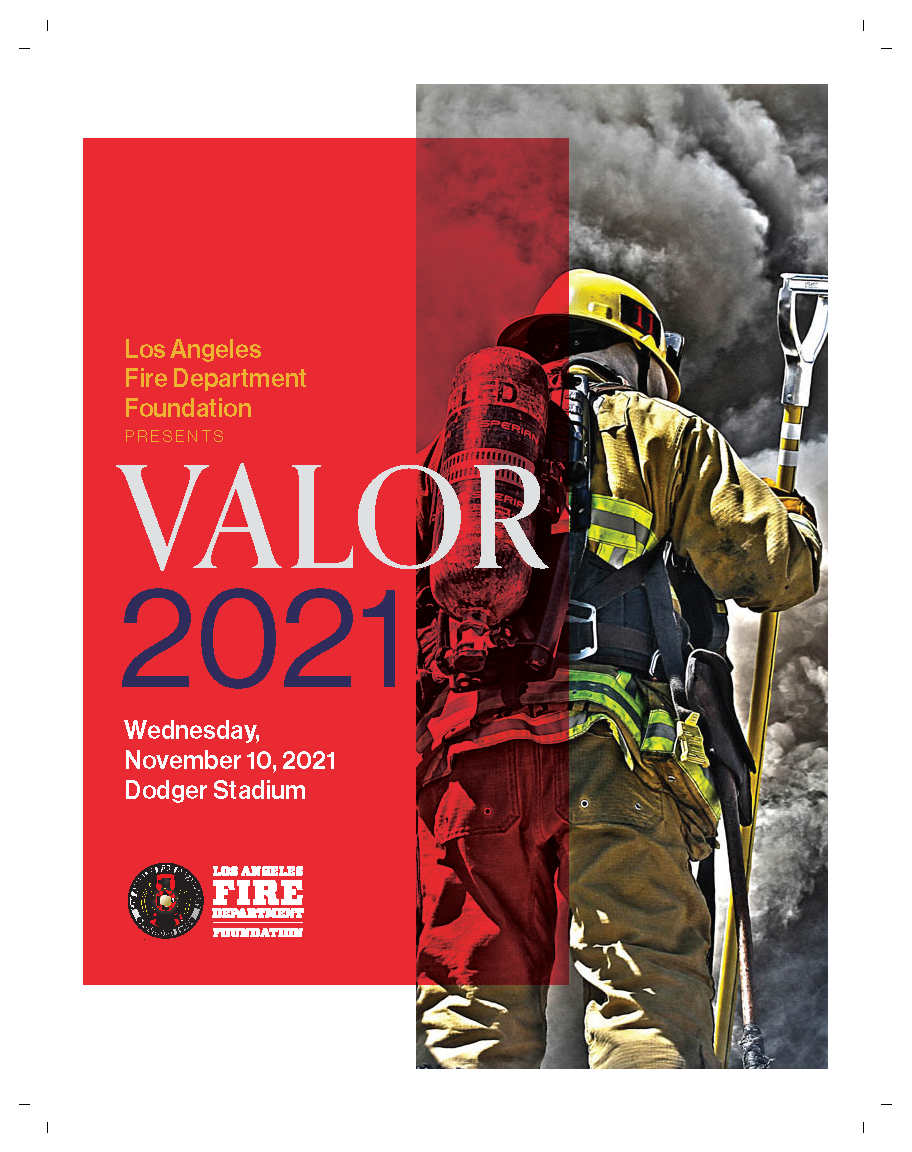 LOS ANGELES - VALOR is the Los Angeles Fire Department Foundation's annual awards ceremony honoring outstanding service above and beyond the call of duty. This ceremony recognized actions taken during 2020-2021, and took place at Dodger Stadium on November 10, 2021.

Metropolitan Fire Communications, often referred to as “MFC” or “Metro,” is the Los Angeles Fire Department’s central processing hub for 911 and non-emergency fire department calls. MFC is the nerve center from which all LAFD emergency-related resources are dispatched.

Established in 2012, MFC is one of the most technologically advanced dispatch centers in the nation. MFC members work around the clock from this state-of-the-art command center to ensure L.A.’s emergency calls are handled efficiently, and with the highest degree of professionalism and compassion.

The dispatchers assigned to MFC are either Firefighter/Emergency Medical Technicians or Firefighter/Paramedics, who all have served previously in the field. Their primary responsibilities are to quickly deduce the nature of the caller’s emergency and help mobilize the appropriate LAFD resources. Without a doubt, it is one of the most complex and challenging roles within the Department.

Lives are literally on the line when dispatchers answer a call. MFC processes more than 2,800 emergency calls each day, and an individual dispatcher may handle as many as 100 calls per shift.

At the height of the pandemic, dispatchers helped guide anxious 911 callers through the fear and uncertainty of coping with medical emergencies. Dispatchers had the delicate task of triaging nonlife- threatening calls in the hopes of decreasing ambulance dispatches to low-acuity patients. By identifying callers who could safely self-monitor and treat themselves at home with telehealth guidance, dispatchers helped reduce the exposure of firefighters and medical personnel to potential COVID-19 patients.

The 2021 Division of the Year award is presented to the 127 dispatchers, dozens of support personnel, and team leaders at MFC for the outstanding service they deliver to the citizens of Los Angeles and for their unwavering resolve under the pressures of the pandemic.

The Annenberg Foundation is a family foundation focused on addressing the critical issues of our time through innovation, community, compassion, and communications for more than 30 years. Since 1989, it has funded programs in education and youth development; civic and
community life; equity and social justice; health and human services; animal services and the environment; and arts, culture, and humanities.

Funding from the Annenberg Foundation also helped the LAFD secure a new D5 bulldozer —a small, nimble bulldozer that can traverse rugged terrain and scale hillsides faster and safer than its larger counterparts. The D5 can cut up to eight miles of defensible line per hour, making it a tactical asset in the fight to protect homes and high-risk communities.

The Los Angeles Fire Department is deeply appreciative of the support, funding, and spirit of partnership extended by the Annenberg
Foundation. In gratitude for all it has done for the LAFD and the people of Los Angeles, the Annenberg Foundation is presented with the 2021 Community Impact Award.

As one of the most respected privately-held real estate companies in the country, Caruso has the ability to make a profound impact on neighborhoods and communities all across Los Angeles.

At The Grove and Palisades Village, it is evident that Caruso has worked tirelessly to be woven into the fabric of the community, contributing meaningfully to the economic, social, and environmental well-being of all Angelenos and those entrusted with protecting them.

Caruso’s longstanding support and generous contributions have factored heavily into the LAFD Foundation’s ability to secure needed tools and equipment for our firefighters. At the onset of the pandemic, their contributions helped fund supplies and PPE for LAFD field resources and technology for the LAFD’s life-saving telemedicine program. Caruso’s funding also helped the LAFD expand its mobile vaccination and outreach programs to underserved communities.

Most recently, Caruso has been an integral partner in promoting individual and communal emergency preparedness by encouraging patrons at The Grove and Palisades Village to prepare for fire season and other emergencies. Caruso held a series of community workshops and children’s events focused on fire safety, and enlisted retailers and eateries to fundraise for the LAFD Foundation’s funding needs.

Caruso’s generous civic investment and sense of social responsibility has tangibly improved the LAFD’s ability to serve the people of Los Angeles while staying safe in the line of duty. The Los Angeles Fire Department is honored to count Caruso among its most valued community supporters.

In May of this year, Firefighter III Aaron King, his wife, and small child were driving home from a family dinner gathering. As they exited the 101 Freeway,
merely blocks from their new house, they encountered a frantic woman on the off-ramp overpass.

The woman flagged down King’s car and frantically explained that her young daughter was threatening to end her own life. She motioned to the fence and guard rail overlooking the highway below. The daughter had climbed over the fence and appeared ready to jump.

Without hesitation, King sprang into action. He scaled the seven-foot fence and doubled over just in time to grasp the young woman as she flung herself from the ledge.

King’s father-in-law and teen brother-in-law had been driving just ahead. When they saw King go over the fence, they also proceeded to act. They held his legs as King struggled to keep his grip and prevent the girl from falling onto the freeway. As traffic sped along beneath them, the young lady fought violently to free herself from King’s grip.

In the moments that followed, King pleaded with the girl to stop resisting. Firefighter King persevered, holding strong until local firefighters and police arrived on the scene. King is receiving the 2021 Medal of Valor for his courageous and compassionate off-duty actions to prevent a stranger’s suicide attempt at extreme personal risk to himself.

Near midnight on April 24, 2021, LAFD members from multiple fire stations responded to a severe multi-vehicle traffic incident on the 101 Freeway. Upon arrival, firefighters encountered a four-car crash that spanned several hundred feet on one of the busiest stretches of freeway in Los Angeles.

A driver suspected of being under the influence rear-ended a box truck. The impact caused both vehicles to lose control and crash into the center divider wall. The box truck then entered the westbound lanes and was struck by an oncoming vehicle. The box truck ultimately landed on its side, and cantilevered atop the center divider. The truck’s cab had sustained massive damage and was dangling over the westbound lanes, facing oncoming traffic.

Firefighter/Paramedic Chadwick Qualley was the first to climb his way to the top of the wreckage and discovered what appeared to be three deceased victims. Upon closer inspection, Qualley caught a glimpse of eye movement in one of the victims, and he immediately initiated a rescue.

The severely injured victim was tightly pinned under part of the dash console. Qualley removed his protective turnout coat and helmet to squeeze inside the mangled cab. As Qualley worked to stabilize the patient, Firefighter II David Stigger forced his way underneath the passenger side of the dangling cab to assist with the delicate extrication.

At significant personnel risk to themselves, the two members worked in unison to free the patient, despite the possibility of being injured or crushed by the shifting of the unstable cab. With assistance from their fellow firefighters, they extricated the patient and conducted the hand-off to the waiting ambulance crew.

On Saturday, May 16, 2020, at approximately 6:30 p.m., the LAFD responded to a structure fire near the Skid Row area of downtown Los Angeles. The first arriving firefighters encountered a one-story commercial building with light, intermittent smoke escaping from the top of two closed rolling steel doors.

The first members on scene secured a water supply, forced entry into the building, deployed hand-held hose lines, laddered the building, and began to attack the fire. The business, which was closed at the time, was operating as a wholesale distributor to dispensaries and smoke shops.

Access to the building was delayed due to the excessive amount of stored items blocking the entry point. Once inside, conditions quickly worsened over the next several minutes. Initially, firefighters described a notable change in smoke conditions and followed by a rapidly increasing “jet-like” sound, accompanied escalating “popping-like” noises.

As the “mayday” calls echoed across the radio, the catastrophic explosion engulfed members descending an aerial ladder and inside the building. Twelve firefighters were injured.

In the moments that followed, injured firefighters along with members working in the immediate area rushed to help those seriously hurt and remove Personal Protective Equipment (PPE) for the most critically burned. The burned firefighters were triaged and loaded into awaiting ambulances.

A total of 12 members involved in the Boyd St. incident are being honored for their actions and what they endured during this unprecedented event. Just as importantly, these firefighters are being recognized for their unwavering support and commitment to each other, and their resolute determination to persevere and return to duty.

To support this and other projects and programs made possible by the Los Angeles Fire Department Foundation, please visit SupportLAFD.org.