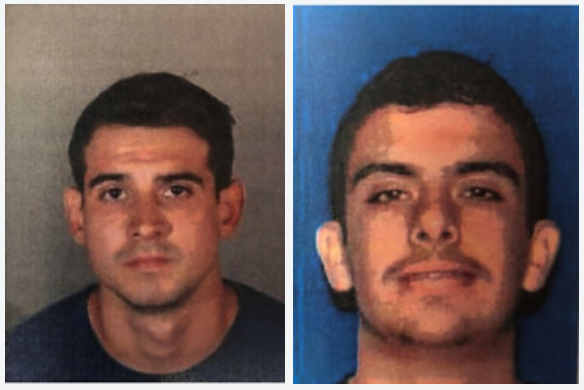 Since a fast-moving wildfire threatened homes in Eagle Rock and Glendale last week, Los Angeles Fire Department Investigators have relentlessly pursued those who caused the blaze they determined to have been an intentional act. Today, those suspects are in custody.

The fire, reported at 4:09 PM on Sunday, August 25, 2019, in the 2900 block of West Colorado Boulevard in the City of Los Angeles, brought a large contingent of fire department responders. Despite the first LAFD engine arriving less than four minutes after the first 911 call, firefighters encountered a swift moving wildfire in steep terrain with thick underbrush, that took nearly 48 hours to fully control.

The LAFD deployed more than 80 firefighting resources to the blaze - a total of more than 300 firefighters by land and air, including every available LAFD helicopter, bulldozer and water tender. The well coordinated teamwork of LAFD and allied agencies held the fire to 45 acres, without a single structure being lost. Though there were no civilian injuries, one firefighter from a mutual aid fire department sustained a non-life threatening injury. He was transported to the hospital for care, and later released.

As their colleagues fought the fire, LAFD Arson/Counter-Terrorism Section (LAFD ACTS) Investigators began a detailed investigation into the origin and cause of the fire. Utilizing burn patterns, witness statements and surveillance videos, LAFD ACTS personnel determined the fire was an intentional act related to a homeless encampment near the origin of the fire, and that the those living in the encampment were specifically targeted by the suspects. The brush fire occurred as a direct result of the attack.

The case against the men will be brought to the Los Angeles County District Attorney’s Office for felony arson filing consideration on Wednesday, September 4, 2019.