As of 6:00PM today, the #PalisadesFire is 100% contained. Firefighters will remain on-scene patrolling to ensure all hotspots are fully extinguished. Fortunately, due to firefighter's relentless efforts, no homes were damaged or destroyed, no civilians were injured and we were able to detain the arsonist within just 36 hours from the fire's start. We would like to thank all of our partners and allied agencies who assisted in a successful conclusion of this incident. For information on how you can be prepared for this year's fire season LAFD Wildfire Preparedness 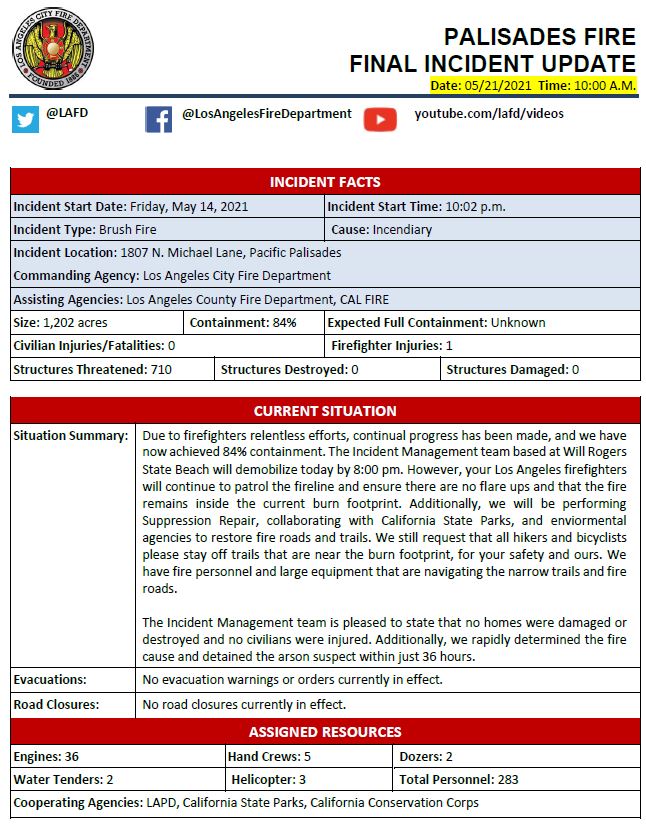 The LAFD UAS (drone) team will continue to assist the incident with mapping, infrared heat signature spotting and observation. This real time data is transferred to Operations that can make validated decisions on where to deploy air and ground resources to effectively mitigate identified heat on this fire. Due to a coordinated effort, we have increased containment lines to 72%.

We would like to request that all hikers and bicyclists please stay off trails that are near the burn footprint, for your safety and ours. We have fire personnel and large equipment that are navigating the narrow trails and fire roads. Thank you.

-Containment has increased to 66%, while acreage burned remains the same.

Firefighters have turned the corner on this fire and are now reinforcing, validating and improving containment lines. Despite overnight high humidity and thick fog, we continue to find heat pockets. We won’t let our guard down just yet, there is still some unsecured open line in the treacherously steep terrain. Small heat signatures still remain near the fire line. Our firefighters, aided by drone infrared technology, remain vigilantly patrolling the 1158 acres of the burn scar, setting out on seek and destroy missions. Due to firefighters tenacity, we have increased containment lines to 66%. We are not out of the woods yet, with potential for spread into vegetation that hasn’t burned in 60+ years. We will continue to work around the clock until we feel that our communities are completely safe.

We would like to request that all hikers and bicyclists please stay off trails that are near the burn footprint, for your safety and ours. We have fire personnel and large equipment that are navigating the narrow trails and fire roads. Thank you. 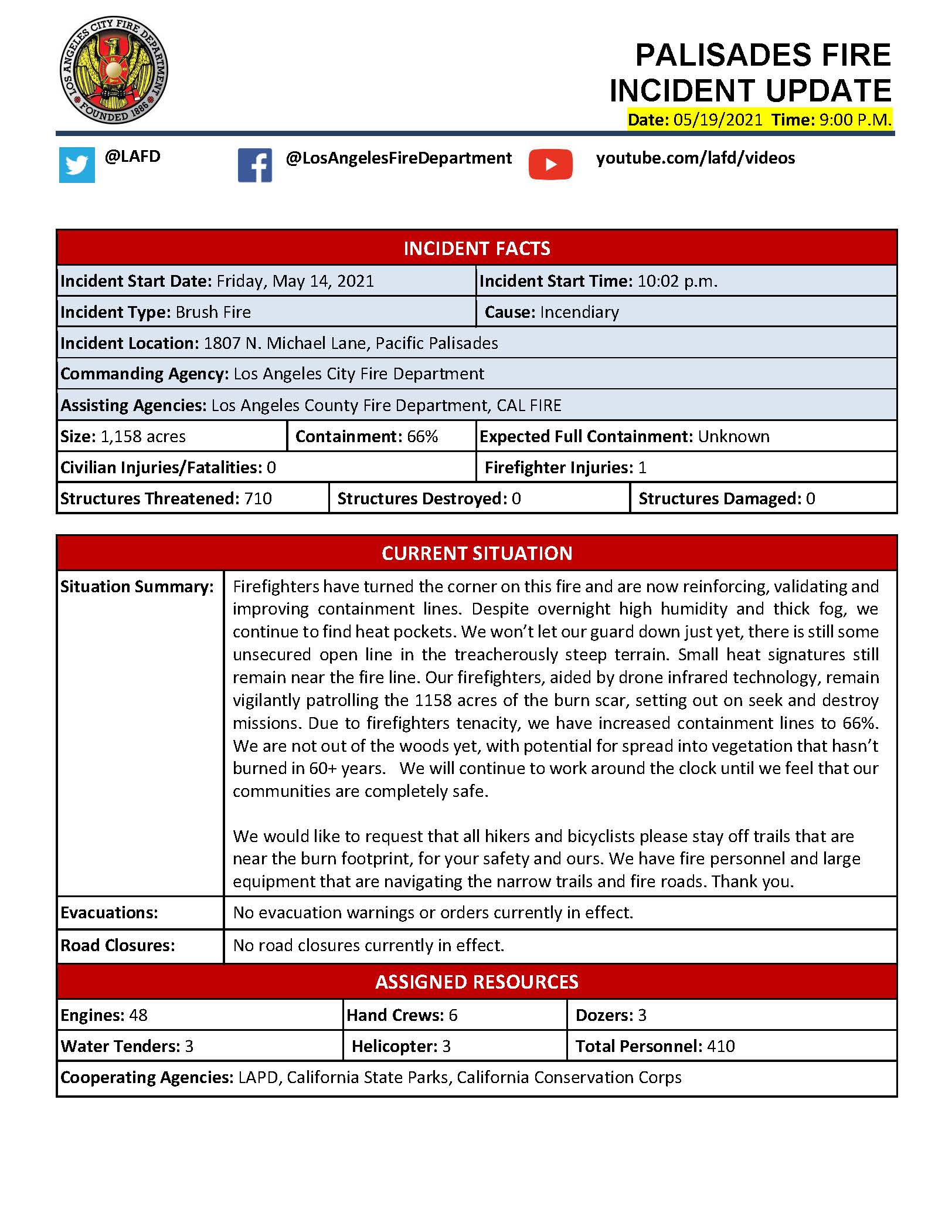 -Containment has increased to 57%, while acreage burned remains the same. 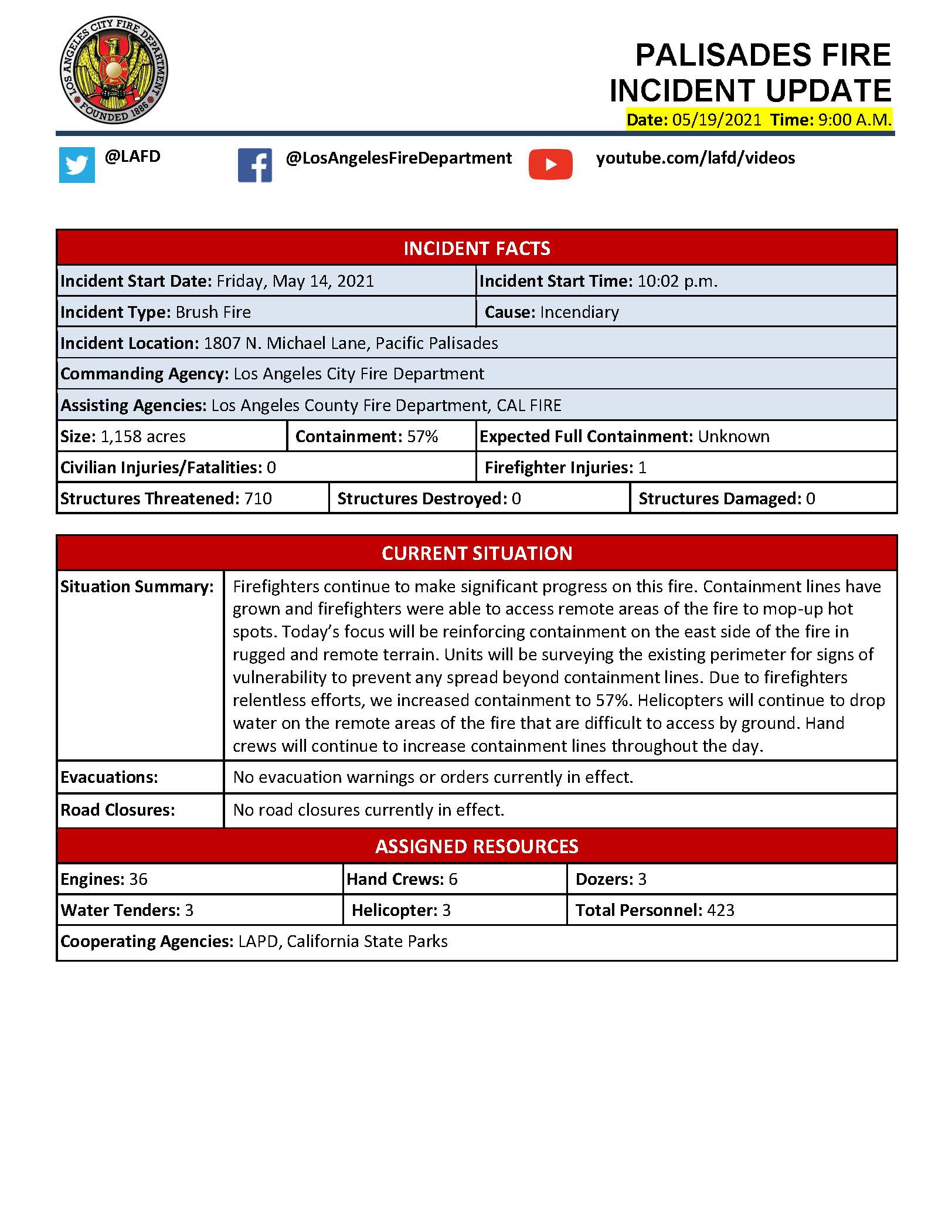 Acreage remains at 1158. Containment has increased to 47%. Road closures and evacuation warnings are no longer in effect. 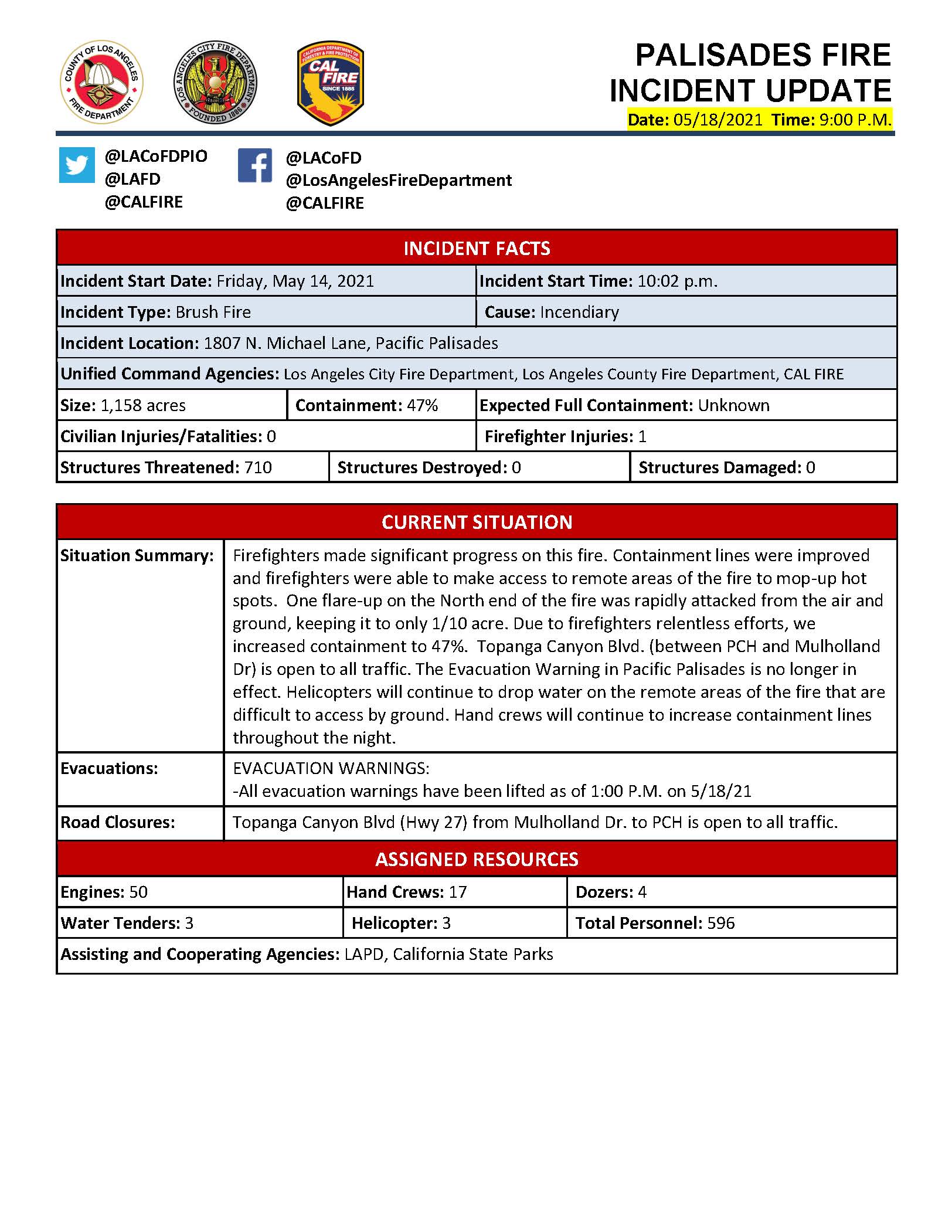 The *Evacuation Warning* has been lifted for homes in the City of Los Angeles near the #PalisadesFire as of 1:00 PM today

Effective at 1:00 PM today, Topanga Canyon Blvd will be open to the public. Thank you for your patience. Please be cautious in the area, as firefighters and equipment continue to work.

Reminder: All backcountry trails and areas within Topanga State Park will remain closed to the public until further notice. We appreciate your cooperation. Twitter @CAStateParks.

- Information has been released regarding the identity of the arson suspect that has been arrested. 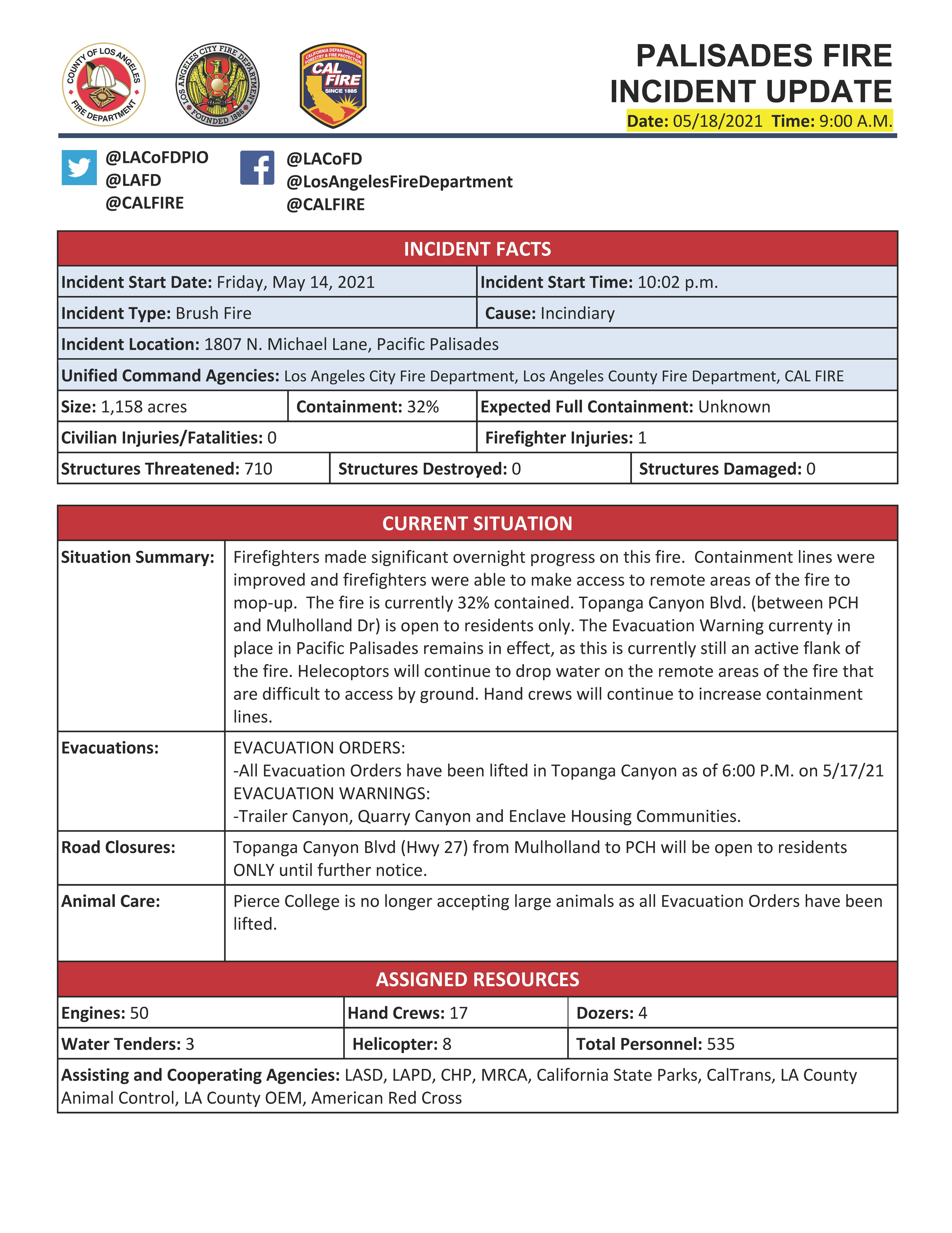 On Friday, May 14, 2021, at 10:02 p.m., a brush fire occurred in the 1800 block of Michael Lane in  the City of Los Angeles. When the first responding engines from the Los Angeles Fire Department  (LAFD) arrived, crews encountered multiple, separate, slow-moving fires in steep and remote terrain  with thick understory dry and dead vegetation.

Just after midnight, LAFD arson investigators were dispatched to the scene to determine the origin  and cause of the fire. Due to the inaccessible terrain and darkness, investigators gathered preliminary  information and returned the next day.

On Saturday morning, LAFD helicopter pilots observed an adult male moving around in the brush  along a steep hillside near the fire. The Los Angeles Police Department (LAPD) air patrol was  dispatched to monitor the individual. Officers from the West Los Angeles Community Police Station  kept watch on the ground while the Air Support Division provided eyes in the sky. During an aerial  observation, the Tactical Flight Officer witnessed the individual ignite multiple additional fires.

Arson investigators from LAFD requested the assistance of specialized deputies from the Los  Angeles County Sheriff’s Department Emergency Services Detail to locate and apprehend the alleged  suspect within the rugged terrain. Deputies were lowered into the brush to begin their search.  Because the fires were growing rapidly, deputies were forced to retreat.

A private security officer in the area recognized the person as a possible suspect and notified LAPD  and LAFD. Police officers arrived and detained the suspect only 36 hours after the fire began. The  suspect was transported to the hospital and treated for smoke inhalation.

After interviews from eyewitnesses, firefighters, and police officers, as well as hours of analyzing burn  patterns and documenting the fire scene, arson investigators determined that the fire was incendiary  in violation of section 451(c) of the California Penal Code Arson of Forest Land.

Fire Chief Ralph Terrazas is grateful to our public safety partners and attentive community members  for working quickly in identifying and apprehending the alleged suspect.

Court Case: Will be presented to LA County DA’s Office 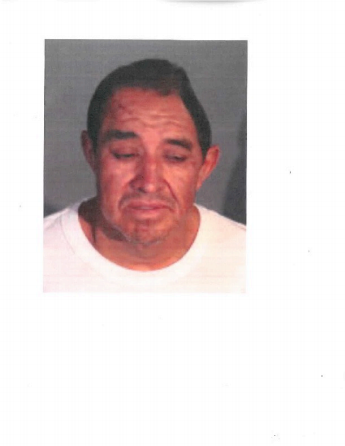 The final evening update is posted below with no change to any of the critical factors. 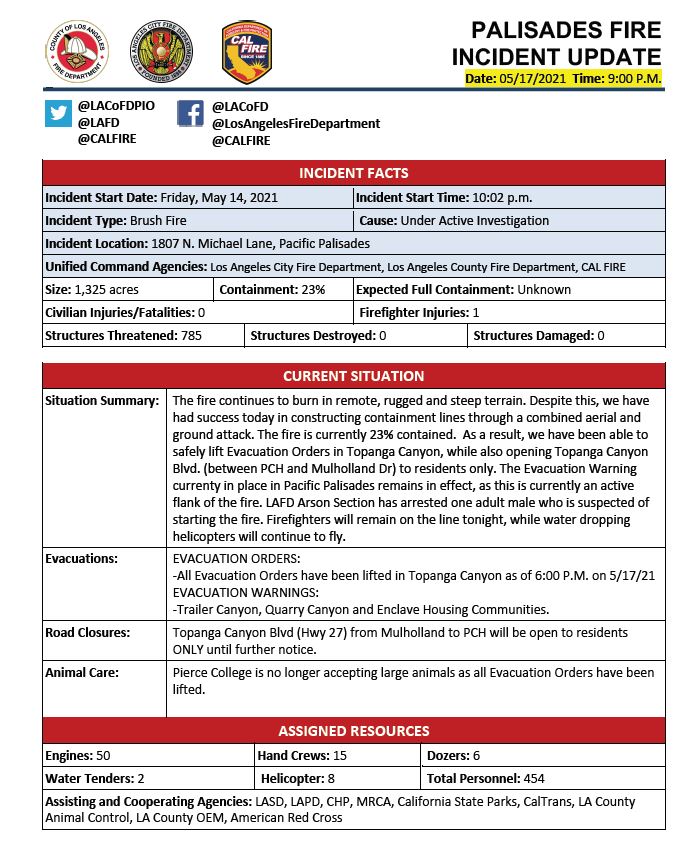 - The County of Los Angeles statement regarding evacuation orders: "As a result of successful firefighting efforts, all evacuation orders in Topanga will be lifted at 6pm. Topanga Canyon Blvd. will be open to residents only, starting at 6pm. Be prepared to show ID or Topanga access card.Thank you for your patience"

The below video is the 10AM live stream of the press conference update.

- No structures have been damaged. One firefighter sustained a minor injury. There are no reported injuries to any civilians.

- The fire remains active and all residents are asked to please adhere to the directions of officials.  NO hikers or observers are to be in the area of operations.

- While water dropping helicopters continue their work, the fixed wing tankers are not able to fly until the cloud cover lifts to 4,000'

- A suspect was detained, questioned and then arrested (adult male) by LAFD Arson Investigators.

Video update provided by the Operations Chief, Chief Albert Ward. There is no change to acreage, containment or the evacuation warning.

During the course of the investigation, LAFD Arson Investigators and LAPD have aggressively tracked down any and all potential leads. We did have one individual who was detained and released. However, we now have a 2nd individual that is being questioned. The active investigation into the cause of the Palisades fire continues.

All residents in this area are asked to prepare for a potential evacuation based on the developing fire activity. Secure your valuables, medicines, etc in your car and be prepared if asked to evacuate.

The Mandatory Evacuation order put in place by the Los Angeles County Fire Department on 15 May for areas within Topanga remain in effect. Please follow @lacofdpio on Twitter for their updates.

If you are facing possible evacuations, you can get tips and resources on how to be Ready, Set, Go!

OVERVIEW: At 10PM on May 14, 2021 the Los Angeles City Fire Department responded to a reported brush fire in the 1800 block of N Michael Lane in Pacific Palisades. The fire was located back in a canyon with steep, difficult to navigate terrain. Most of the area is inaccessible by any vehicles (to include four-wheel drive brush patrols). An air battle ensued throughout the night with water dropping helicopters from both LAFD and Los Angeles County Fire Department while firefighters worked to make access by ground.  By 6:30AM on 15 May, the fire was estimated at 15 acres. Unfortunately, by 4:30PM an additional burn area emerged north of the original fire.  This fire then continued to grow and reached 750 acres by nightfall. Due to the location of the fire, the incident transitioned to a Unified Command with LACoFD and LAFD. At 1PM on May 16, the fire was estimated at 1325 acres with 0% containment.