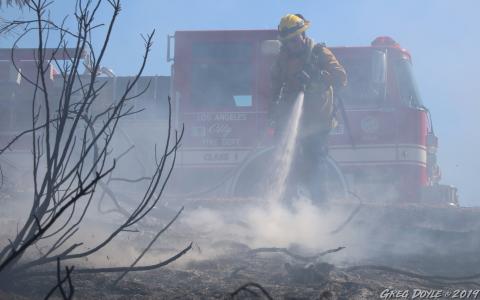 A rubbish fire along the 210 Freeway quickly grew into a brush fire but crews prevented it from taking hold.

At 3:39PM on August 9, 2019 the Los Angeles Fire Department responded to a reported rubbish fire on the Westbound 210 Freeway at Yarnell Street in Sylmar.

When the first engine arrived and found over 1 acre burning in light to medium brush, they immediately upgraded the incident to a full brush fire response.  In addition to over 70 LAFD firefighters, Los Angeles County Fire Department and Angeles National Forest sent a brush response and worked under the command of LAFD Battalion Chief Albert Ward.

Although the fire was slowly approaching a community of homes, the superb brush clearance conducted by the residences ensured they were never under threat.  Firefighters worked between the homes and the fire and held it to just over 3 acres, achieving full containment in 1 hour 44 minutes.

This non-injury fire is under investigation by LAFD Arson and Counter-Terrorism Section per protocol.