Three Rescues in the LA River

A dramatic scene unfolded on live television as firefighters rescued two people from the swift moving waters of the LA River . Their relentless dedication payed off nearly two hours later as the third victim, a large German Shepard mix dog, was safely lassoed.

At 2:13PM on March 28, 2022 the Los Angeles City Fire Department responded to reports of a woman and her dog in the LA River x Burbank. Heavy downpour earlier in the day quickly transformed the river bed from dry concrete into a swift moving river, putting the lives of anyone trapped within it at risk.

Firefighters staged at multiple, pre-designated rescue locations along the river based on the last, known location of the victim. Visual contact was made and firefighters, secured by a rope system, went over the edge to get the stranded woman a floatation ring. The woman, concerned about her dog, abandoned the ring and continued downstream. LAFD Air Operations moved into place and a rescuer was lowered by the hoist system. He safely captured the woman, bringing her to the side and into the hands of the firefighters on the ground. She was later transported to the hospital for minor injuries.

With the dog continuing to move downstream, Air Ops relocated to be in position for a rescue attempt. However, the large dog, scared and in panic mode, fought and the rescuer was not able to hold onto him. Additional attempts were made but the dog, able to run in the water at points, continued to fight and evade.

The fire companies on the ground moved to further points downstream to set up for ground rescue to support the air operations efforts. Knowing the river flattened out and provided an area where firefighters would be able to stand, the Incident Commander Assistant Chief Timothy Ernst, in consult with the Swift Water Rescue Team leaders, devised a strategy to corral the dog with multiple rescuers so it could not evade them. LA Animal Services Specialized Mobile Animal Rescue Team (SMART) was also on scene providing their expertise.

Meanwhile, numerous people flocked to the fence of the river to witness the drama. One bystander, a 28 year old male, entered the water to rescue the dog. While the desire to help is understandable, this type of action is extremely dangerous. It not only puts the life of the bystander at risk but now creates another victim for the firefighters to handle.  The man was able to grab the dog and managed to stay afloat for a ride downstream until another bystander tossed down a rope. He held on but the water was too strong and the dog broke away. LAFD Air Operations was in place and latched onto him just in time, as his hands gave way on the rope. He was raised up and over the fence, then collapsed onto the ground, exhausted. He was transported for injuries sustained during efforts, lucky to be alive. 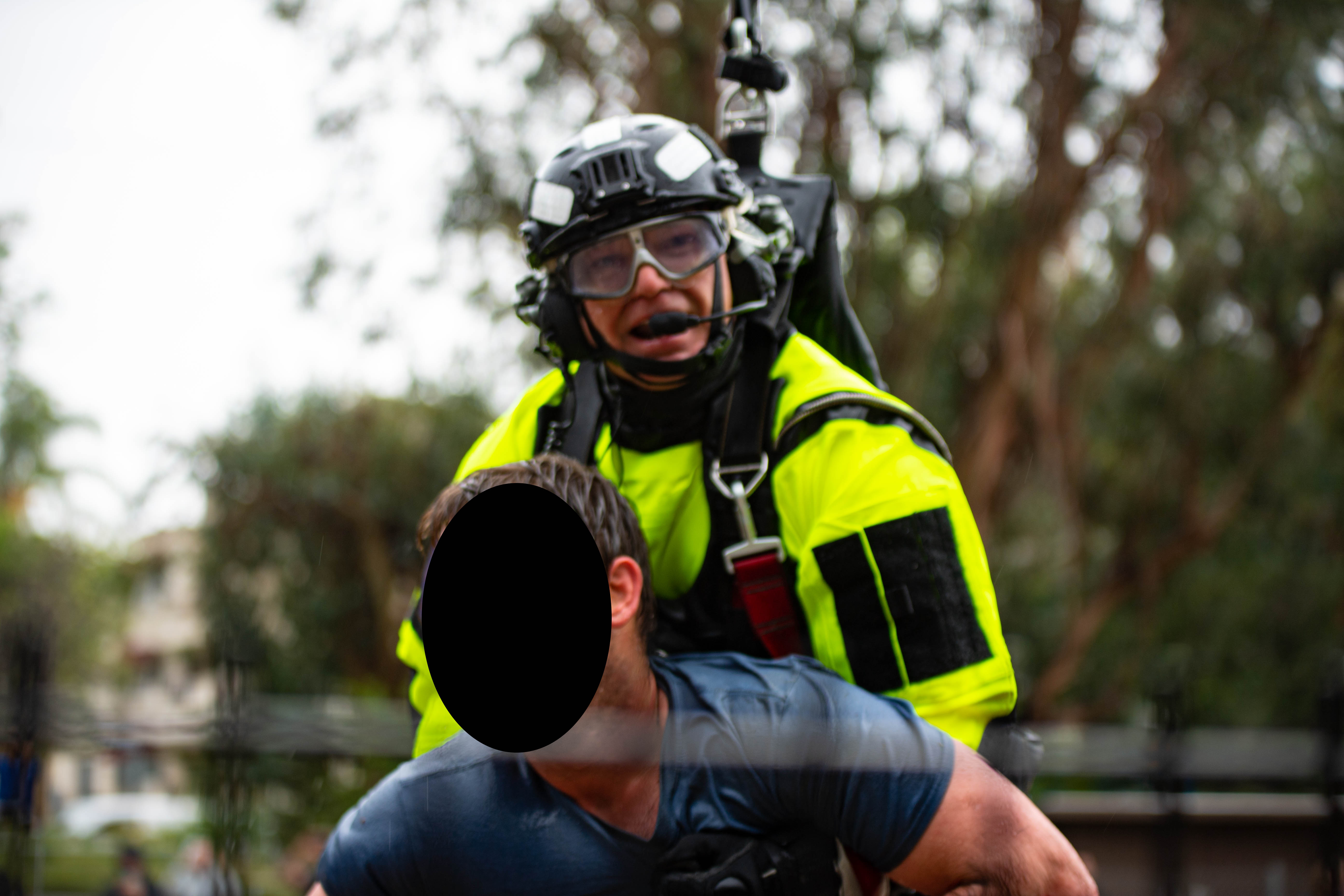 The dog, now able to walk in the shallow water, made it down to where the Swift Water Rescue Team was waiting for him. They spread out and slowly surrounded the dog, expertly lassoing him with a rescue strap. 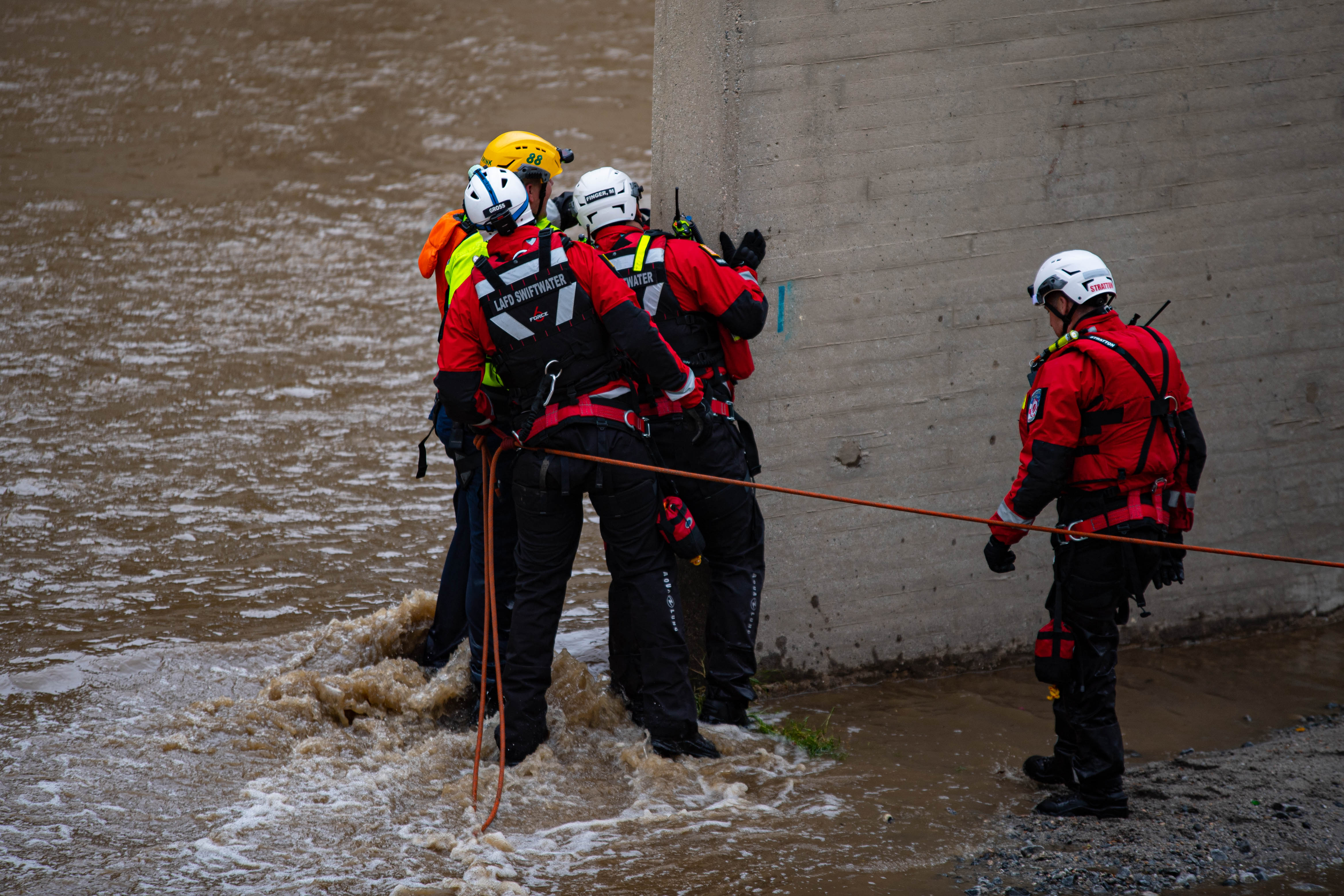 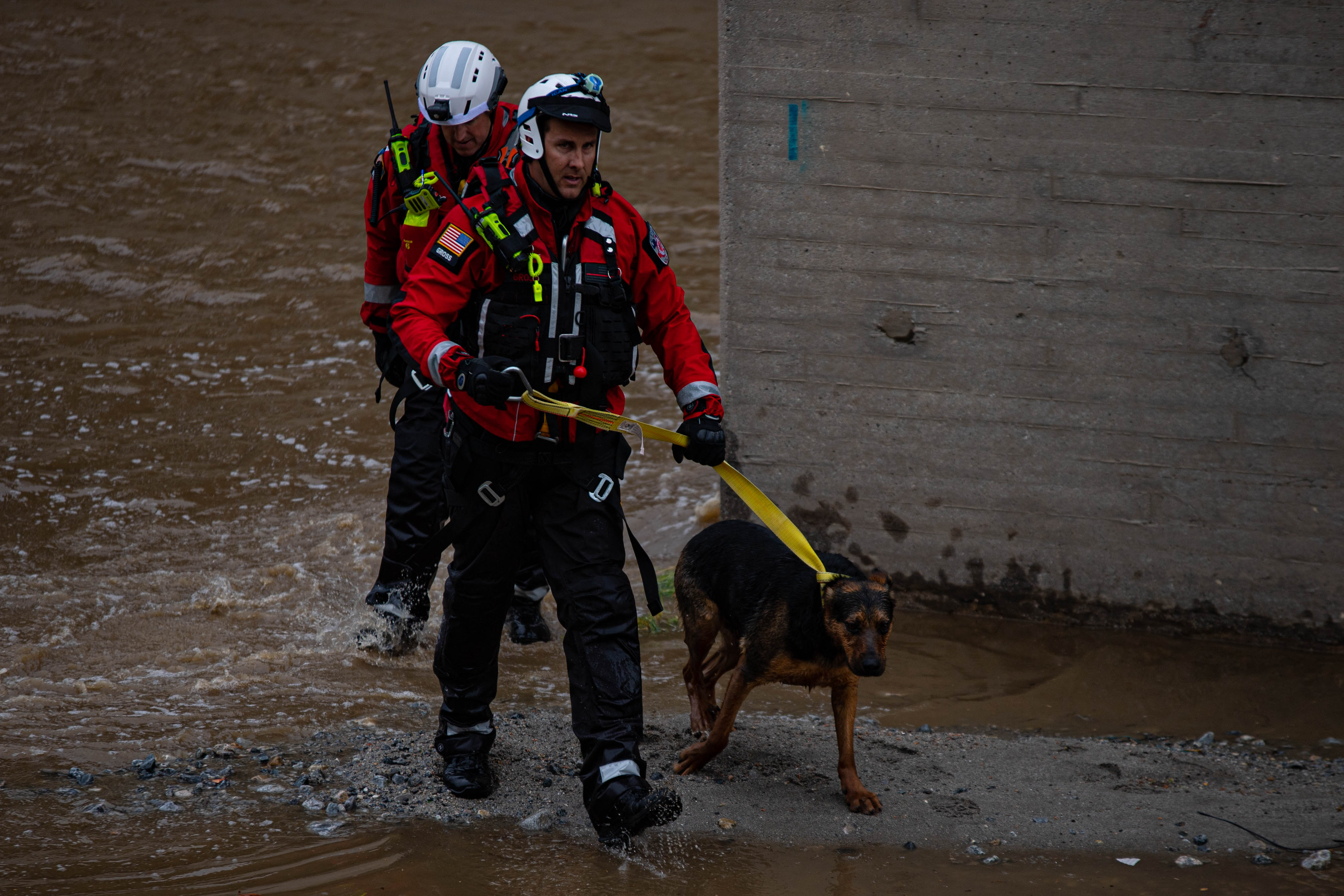 The crowds gathered above cheered as the dog and crews safely walked out of the river.  The SMART team evaluated and took control of the dog for future reunification with its owner.

This incident, because of the practiced training Your LAFD firefighters undergo, resulted in three safe rescues. However, it could very easily been a different outcome. Merely six inches of fast-moving water can sweep a person off their feet. It takes only 12 inches to move most cars off a road. LAFD firefighters have the safety equipment and specialized training to make these rescues - while civilians do not. It is imperative that bystanders do not intercede and put more lives at risk.