When A Boy On A Bike Causes Us To Reflect, Remember - and Thank You!

It's not uncommon throughout the year to have people ask firefighters about their most 'memorable' emergency response.

In gathering with family and friends during the holidays though, the men and women of your Los Angeles Fire Department will often take time to reflect upon and share instead, the incidents that were most meaningful.

Among the A Platoon crew at Fire Station 91 in Sylmar, there is a deeply meaningful incident they are proud to recall this holiday season. 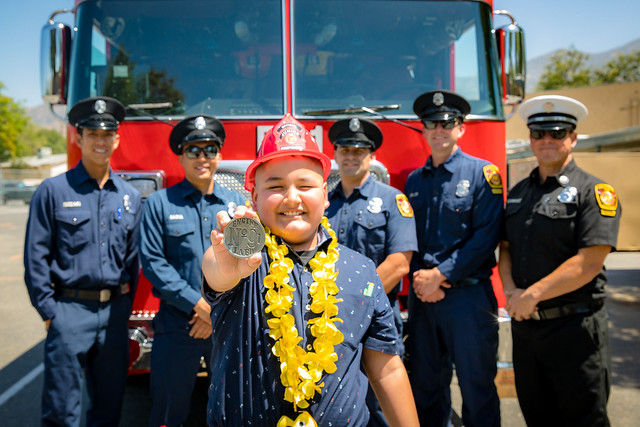 Monday, March 7, 2022 began like any late winter day in the northeast San Fernando Valley. With temperatures having dipped to 39°F overnight, the personnel assigned to Fire Station 91 began their day with a quick cup of coffee before the 6:15 AM sunrise, as they prepared their apparatus, equipment and themselves for the 30 emergency incidents they would come to handle during their 24 hour tour of duty.

Little could the crews assigned to LAFD Engine 91, Paramedic Rescue Ambulance 91 and surrounding fire stations know that one of those incidents would prove to be among the proudest and most rewarding of their careers.

As twilight settled over the foothills of the San Gabriel Mountains, a bright and energetic ten year old boy was was riding his mountain bike down a hillside trail not far from his suburban home when tragedy struck. What would happen in the moments, minutes and weeks that followed, were a textbook example of how a far-reaching Chain of Survival can and did save a life.

The alarm bell at Fire Station 91 rang at 6:08 PM, the automated loudspeaker voice advising Engine 91 and Rescue Ambulance 91 they were headed to assist a person injured in a fall.

As the Engine and Ambulance departed the station, an LAFD 9-1-1 Dispatcher continued to query and provide instructions to the caller, as he continuously updated the data appearing on the computer screens in the responding LAFD vehicles.

During their three mile light-and-siren journey to the call, Captain Corey Rodriguez and his crew noted the series of real-time updates, including "the patient is unconscious", and soon thereafter "patient in cardiac arrest with CPR in progress". Additional notes indicated the "patient was mountain biking 1/4 mile up a trail" to the rear of a given address.

With expert knowledge of the challenges in that mountainous area compounded by darkness, Captain Rodriguez requested the LAFD Dispatcher to add additional ground units, and a pair of LAFD Helicopters, one to provide aerial reconnaissance and emergency lighting, with the other a fully equipped air ambulance staffed by LAFD Flight Paramedics for use as needed.

Engine 91 and Rescue Ambulance 91 arrived at the given address, to be met by helpful residents who not only offered their home and yard as a portal of entry to the urban wilderness, but swiftly removed a section of their own fence to allow LAFD units quick and efficient access to the trail where the patient had fallen.

Captain Rodriguez and his crew soon arrived at the patient’s side to find an adult male - the patient’s father, administering CPR to his  10 year-old son. Nearby were the boy's mother and another man, standing alongside the boy's bicycle and helmet.

As the Firefighter/EMT's and Firefighter/Paramedics of Engine 91 and Rescue Ambulance 91 immediately went to work to assess and provide definitive treatment to the patient, Captain Rodriquez, also a Paramedic, guided incoming units and gathered the patient's medical history and an overview of the incident to relay to hospital medical control and pending caregivers.

The mother and father confirmed that the patient had been riding his bicycle down the trail, with his helmet on, when he lost control and crashed head first into a steel metal fence railing, sustaining serious injury to the rear of his head, with other signs of life-threatening head trauma.

With welcome news from LAFD caregivers that the patient's pulse had returned, the now larger team of LAFD responders continued their advanced life support care for the still unconscious and barely breathing youth, who was immobilized on a backboard and carried down the trail to a strategically placed gurney and ambulance made directly accessible via the fence earlier removed by a caring neighbor.

With a detailed description of the incident and the medical challenges the patient was experiencing, the nearest Pediatric Trauma Center quickly chose to accept the critically injured patient, precluding the need to use the LAFD air ambulance to a more distant facility.

As Captain Rodriguez gently assisted the boy's mother to the front seat of the ambulance and secured her seat belt, he assured her that her son would be in good hands.

With much of his crew aboard Rescue Ambulance 91 to provide in-transport critical care, Captain Rodriguez extended appreciation to neighbors and bystanders as he summoned the Mayor's Crisis Response Team to assist them, as well as the boy's family and friends in their path to recovery.

Knowing that the stress of such an incident was not limited to others, Captain Rodriguez also notified his chain of command of the benefit of a brief after action review, as well as making Critical Incident Stress Debriefing available to LAFD responders.

Most calls end there.

While there were nearly a dozen additional emergencies that shift in Fire Station 91's district, there was something about this one that stayed with the responders.

Fast forward three months to the morning of June 9, 2022.

Something was telling Captain Rodriguez that morning, that it was the right time to reach out to the boy's family. Prepared to receive word that the boy had succumbed to his injuries, Captain Rodriguez made a solemn phone call to the patient’s mother to check in on the family, and to ask if they could use any help around the house.

To his surprise, the news was quite the contrary.

The mother reported that the boy had been in a coma for a week and very slowly began to show signs of response and reaction. She reported that her son returned home from the hospital on May 8, 2022 - Mother's Day.

He continued to improve and eventually made his return to school on May 13, 2022, for short time increments.

As the phone call continued, she informed Captain Rodriguez that the boy and his family were set to attend his 5th to 6th Grade Promotion Ceremony at an elementary school in Fire Station 91’s district the very next day - June 10, 2022.

Captain Rodriguez knew he would have to work quickly. He asked if members of Engine 91 might be allowed to attend the ceremony to celebrate the patient, and also asked if she would allow him to update the nurses and doctors at the Pediatric Trauma Center about her son's tremendous recovery. The patient's mother and the school were quick to approve the request, and excited that the attendance of first responders and clinical caregivers would be a surprise.

Just hours later, on the morning of June 10, 2022, four members from the Pediatric Trauma Center at Northridge Hospital and LAFD responders gathered at Fire Station 91 and caravanned to the elementary school where the promotional ceremony was held.

During the ceremony, each of the children stood up as their names were called, to hold up a poster of what they wished to be when they grew up. When the patient’s name was called, he stood proudly and held up his poster that read: “When I grow up, I want to be a Firefighter!”. The entire crowd gave him a standing ovation. The outpouring of love and support for the patient and his family was both unmistakable and heartwarming, as were the widespread tears of joy.

Warm embraces were exchanged because all present knew they had experienced nothing short of a miracle!

We share this heartfelt story as way to thank you for assuring the men and women of LAFD and others in the Chain of Survival always have the team, tools and training to make a difference.

Our LAFD Family strongly salutes the nurses, doctors, surgeons, therapists and technicians who work tirelessly around-the-clock beyond the public eye to make such amazing recoveries as this possible.

When there is a crisis, the Chain of Survival may not be immediately apparent. It certainly includes more than those in uniform or scrubs. It may be a passerby who quickly calls 9-1-1, a Good Samaritan who renders initial aid, and yes, even a neighbor who selflessly tears down their own fence to assure responders can quickly help save a life.

We thank the many of you who have been a part of and continue to support that Chain of Survival, because when life hangs in the balance, we are stronger together.

From our family to yours, please have a safe, healthy and joyous holiday season. Please also take time to embrace the ones you love, and remember that if something unthinkable should ever happen, the Chain of Survival, support and recovery begins with your call to 9-1-1.