On July 26, 2021, 17 year old Leo Kaufman, a LAFD Fire Cadet, bravely and steadfastly did all he could to save the life of a victim of a horrific traffic accident in West Hills. This is a story of a young man taking action while others stood by, in shock. It is a testament to the power of CPR training, the importance of the "Chain of Survival" and gives weight to our request of all to "LEARN CPR and SAVE A LIFE!".

After a vehicle ran a red light in the 6800 block of Platt Ave in West Hills, it collided with a truck driven by a 79-year-old, Mr. Dennis Platt. Mr Platt was ejected from his truck onto the asphalt with such force, he suffered severe head trauma, countless fractures, and went into cardiac arrest.

At this very moment, LAFD Fire Cadet Leo Kaufman was driving by and witnessed the accident. Leo instinctively pull over and jumped out of his vehicle into a chaotic scene. He quickly evaluated his surroundings and noticed a crowd standing around a patient that was face down, bloody, and severely injured. Bystanders stood by in shock, not knowing what to do. It was clear to Leo that if no action was taken, the patient would not survive.

Fortunately, Leo knew exactly what to do thanks to his LAFD Cadet Program CPR training. He relied on his training and rolled the trauma patient onto his back, initiating life-saving CPR. Despite some vocal people in the crowd second guessing his actions and contradicting his life-saving efforts, Cadet Kaufman worked relentlessly, performing chest compressions and circulating oxygen to the brain and heart of Mr. Platt. He did not know if his actions were going to be effective but he did know it was the only way to give this patient a chance at life.

Meanwhile, your LAFD firefighters were rushing to this scene with lights and sirens. As elite medical professionals they immediately rendered scene-safety, took over medical aid, quickly triaged, treated, and transported the patient to Northridge Hospital where a team of skilled healthcare workers took over.

Mr. Platt sustained very serious injuries which are too gruesome to share in detail but it was clear, his prognosis was not promising. Mr. Platt and his wife were told he should expect to be a quadriplegic, reliant on a wheelchair for the rest of his life.  However, he regained full cognition (with mild memory loss) and is able to walk assisted (mechanical and human). His incredible rehabilitation and recovery at Northridge Hospital is a story for another time.

This incident serves as a powerful example of the importance of Bystander CPR and the Chain of Survival. The "Chain of Survival" is a metaphor used to educate the public about their vital role in helping victims of sudden cardiac arrest (SCA).

The six steps in the chain of events that must occur in rapid succession to maximize the chances of survival from SCA are reliant on bystanders helping. Recognizing SCA, Calling 9-1-1 and Starting CPR are the first three steps and Cadet Kaufman's efforts to ensure all three were implemented gave Mr Platt his chance. The arrival of Your LAFD firefighter/paramedics ensured the remaining steps in the Chain of Survival were expediated, delivering Mr Platt into the skilled hands of the Northridge Hospital staff.

Cadet Leo Kaufman, a 17-year-old young man, valiantly did what he was trained to do when it mattered most, and he did it extremely well!

Today, Your LAFD Fire Chief Kristen Crowley, with Mr and Mrs Platt, the LAFD crews on scene and Northridge Hospital members present, was honored to present him with a Certificate of Appreciation which reads as follows:

" Leo J. Kaufman, LAFD Cadet.  In recognition of your heroic courage and immediate assistance in saving a man's life during a cardiac arrest emergency on July 26, 2021, in the West Hills Community. The Los Angeles City Fire Department commends your extraordinary life-saving efforts of a citizen of the City of Los Angeles. Presented this 9th Day of August, 2022" 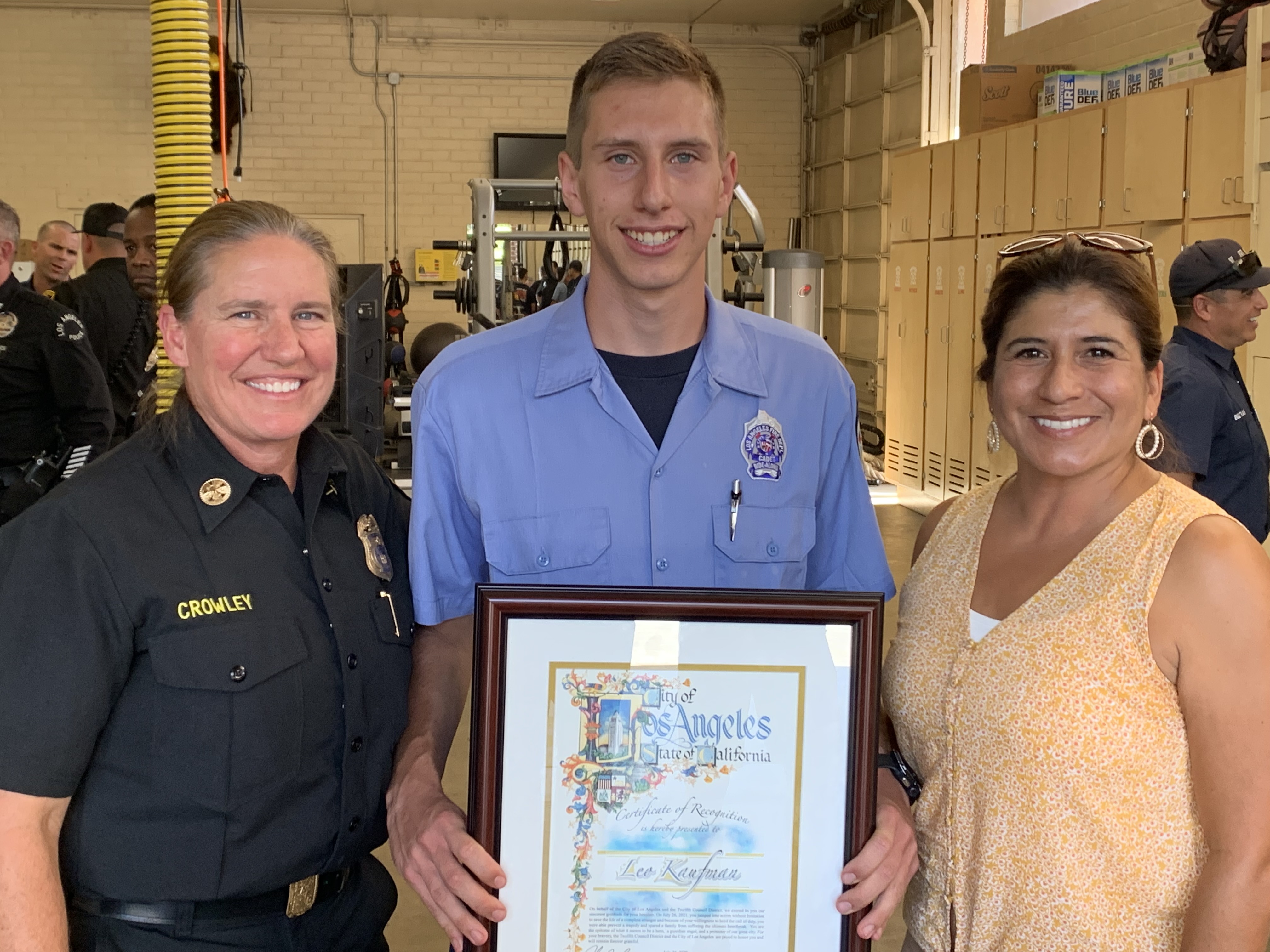 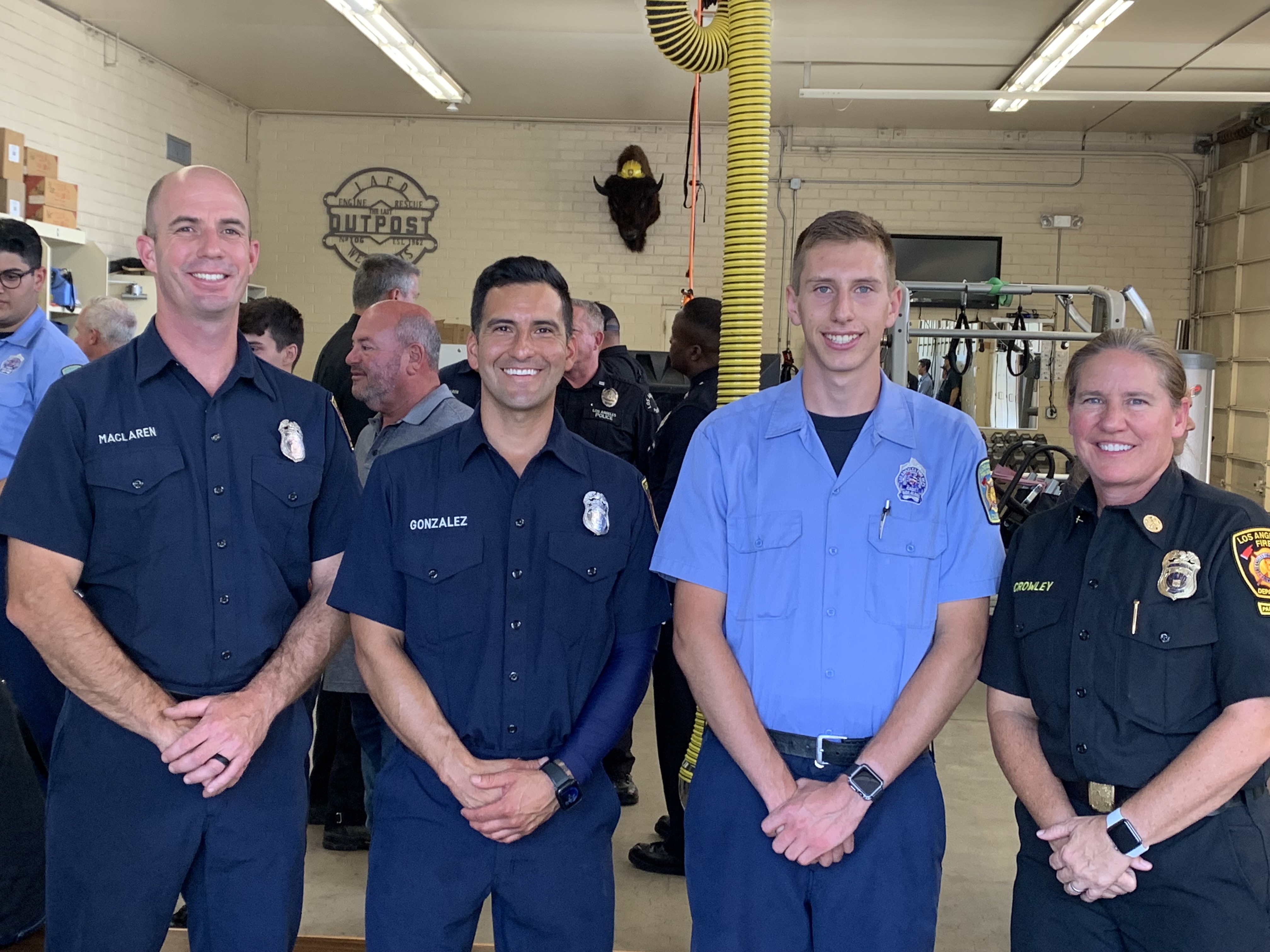 We hope reading about the actions of Cadet Leo Kaufman encourages you to Learn CPR  because you could be the difference between life and death for someone needing help as desperately as Mr Platt did that fateful day.